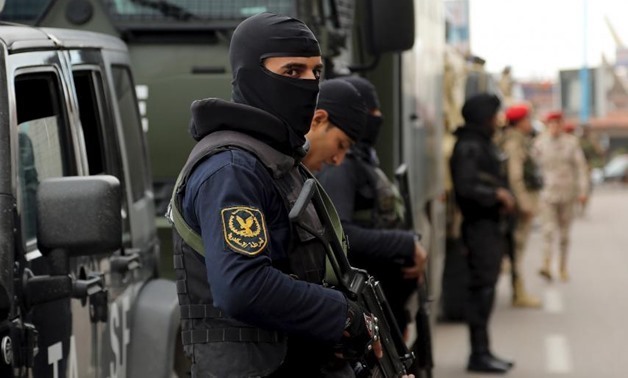 CAIRO – 15 April 2020: It took Egypt almost two years to end the state of political turmoil in 2013 when former President Mohamed Morsi was ousted. Since then, terrorist attacks have been planned from inside and outside the northeastern African country, taking the lives of police personnel and armed forces, who have been in the front line in the counter-terrorism battle.

Yesterday, April 14th, during the last hours before the dusk-to-dawn curfew over coronavirus, dwellers of the crowded Amiriya district in the capital Cairo, while in their flats, were shocked after hearing the unfamiliar sound of gunfire followed by a warning from the Interior Ministry to not get close to the windows.

Policemen have targeted a terrorist cell that, according to the Interior Ministry, practiced extremism and timed their attacks to coincide with Christian religious holidays.

On the first hour of the curfew, after 8:00 a.m. local time, the security forces were done with the issue after fierce fire exchange that reportedly lasted for as many as four hours. The ministry announced the death of seven terrorists and said it lost also Lieutenant Colonel Mohamed Al-Houfi, a father of three children, the oldest of whom is 7 years old.

President Abdel Fattah al-Sisi mourned the death of Houfi and wished the policemen injured in the raid a speedy recovery.

“I followed with pride and appreciation the heroic action of the men of the Interior Ministry,” the president said in a Facebook post on Wednesday

He added that such action has “affirmed the courage of policemen in the face of terrorist and the ability of the Egyptian state to preserve security and safety of the homeland and the citizens despite all challenges.”

The body of Houfi was moved for burial to his birthplace, Damanhur, in the northern city of Beheira. The governor, Hisham Amna and many other executive officials as well as the victim’s family and neighbors attended the funeral, while trying to maintain social distancing over coronavirus. His body was wrapped in Egypt’s flag, and the procession was led by policemen who performed salute to the body of the victim.

Prime Minister Mostafa Madbouli commented on the incident, saying the “terrorist” group planned to seize the opportunity of these upcoming religious ceremonies to implement their plots. He paid tribute to the “brave policemen and the heroes who are martyred in these operations.”

The security forces confiscated six machine guns, four birdshot rifles, and a large supply of ammunition found with the dead terrorists, the Interior Ministry said in a statement.

The statement added that the security forces also raided a weapons store located in Al Matariya neighborhood in the east of Cairo to find four machine guns and ammunition that would have been used in the attacks against the Copts. Egyptian General Attorney Hamada Al Sawi ordered to open an investigation into the fire exchange between security forces and terrorist elements at a Cairo’s neighborhood that ended with the elimination of the terrorists.

President Sisi in January hailed the “sacred” and “vicious” war the security forces have endured, in cooperation with armed forces, against black terrorism, saying such efforts would be always appreciated by him, and by the “great people.”

In February last year, a suicide bombing in Cairo killed three policemen and wounded six others along with several pedestrians, security sources revealed, as the suspect exploded himself after being cornered by security authorities.

CAIRO – 7 November 2019: Egyptian President Abdel Fattah El-Sisi on Thursday said he had a “relentless will” to counter terrorism as it had badly affected the image of the religion, adding that Egyptian people were in a continuous struggle against terrorism.