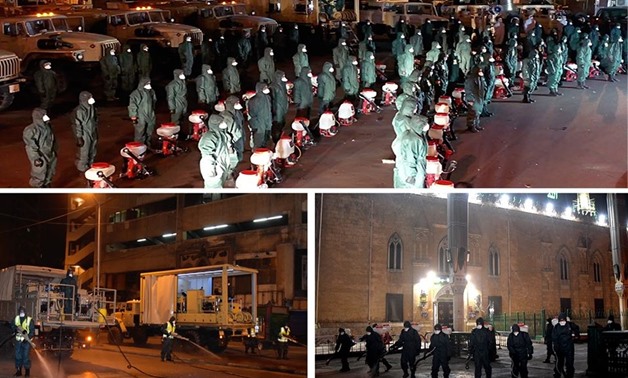 CAIRO - 30 March 2020: During curfew hours, the Egyptian Armed Forces sterilized sites and streets that are subject to visitor density in Downtown and Old Cairo as they constitute large markets of garments, textiles, and houseware products.


A partial curfew in Egypt began on March 25 to last for 15 days as a protective measure against the spread of coronavirus among a bundle of rules that include decreasing the working hours of stores and shopping malls, and the closure of restaurants and cafes.

CAIRO - 24 March 2020: Prime Minister MostafaMadbouly held a press conference on Tuesday to announce a bunch of strict protective measures taken in the face of the coronavirus pandemic starting Wednesday for 15 days. First, a curfew takes place between 7:00 p.m until 6:00 a.m.


The Ministry of Health and Population declared on Sunday that COVID-19 cases rose by 33 for the total figure to become 609, including 132 who completely healed and left the quarantine hospital. The number of deaths became 40 increasing by four.