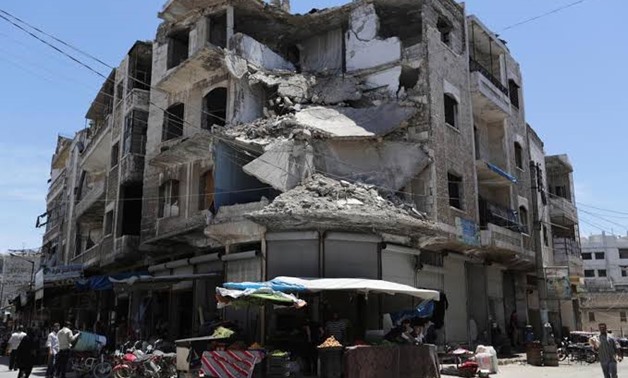 FILE PHOTO: People walk past a damaged building in the city of Idlib, Syria May 25, 2019. REUTERS/Khalil Ashawi

CAIRO - 1 February 2020: The Russian Reconciliation Center for Syria announced on Thursday that government forces restored control over 27 residential areas in Idlib’s de-escalation zone, and that they lie five kilometers away from Saraqib city.

U.S. special envoy for Syria James Jeffrey stated on the same day that Syrian government and Russian warplanes had hit Idlib with 200 strikes in the previous three days causing 700,000 Syrians to flee to Turkish borders.

The center revealed on the following day that the Syrian Armed Forces aborted an attack planned by Idlib militants against Hama and Aleppo. The center explained that the offensives launched by the Syrian army pushed militants to retreat to the depth of the de-escalation zone in the governorate leaving behind huge quantities of arms, ammunition, and equipment, which were likely prepared for a future assault.

The munitions confiscated and destroyed by the Syrian government forces are 11 tanks, 19 armored vehicles, 62 vehicles having heavy weapons, 4 launchers, 38 cannons, 4 drones, and others.

Russia's Permanent Representative to the United Nations Vasily Nebenzya warned on Thursday of a scheme by terrorists to launch chemical attacks against civilians and allege the government forces of committing the crime, as reported by RT Arabic.

On the same day, the Russian Ministry of Defense announced the death of 211 Syrian soldiers and the injury of 300 since January 9 because of militants assaults. As for civilians, 121 were killed and 254 were wounded.

The Arab Syrian Army restored control over Ma`arat al-Nu`man city, which used to be Al Nusra Front stronghold southern Idlib, as well as Wadi Deif Base.