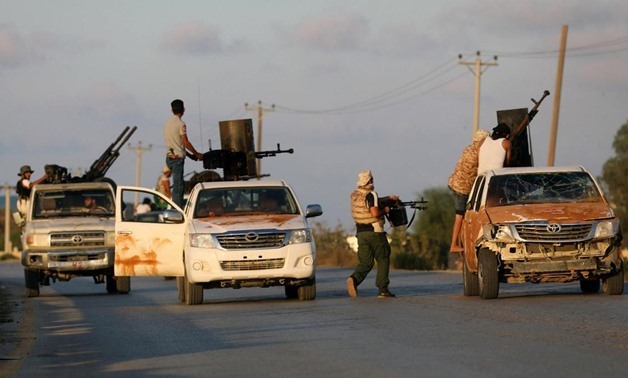 Militias allied to Libya's Government of National Accord fight rival groups in Tripoli in September 2018. Reuters

CAIRO - 18 January 2020: TASS acquired draft conclusions of the Berlin conference on Libya to be held on Sunday showing that the focus will be on six aspects that are military movements, security reforms, sanctions on those who breach arms embargo, special committee, ceasefire agreement, and economic reforms.

Participants in the conference call for the termination of all military movements in support of warring parties and “the establishment of unified Libyan national security, police and military forces under central, civilian authority, building upon the Cairo talks, and the documents produced there-in.”

The draft conclusions advocate the enforcement of UNSC sanctions against those who breach Resolution 1970 (2011) and the Council’s subsequent Resolutions, including the proliferation of arms from Libya.

"We herewith create an International Follow-Up Committee (IFC) in order to maintain coordination in the aftermath of the Berlin summit, under the aegis of the United Nations," the document says according to TASS.

The draft proposes that all parties concerned agree on a truce coupled with militias dismantling urging "the redeployment of heavy weapons, artillery and aerial vehicles and their cantonment."

"We call upon the United Nations to facilitate ceasefire negotiations between the parties, including through the immediate establishment of technical committees to monitor and verify the implementation of the ceasefire," the document adds as reported by TASS.

The document also stresses the necessity of launching a reconstruction program “under the auspices of a new representative and unified government of national accord exercising its authority over all Libyan territory, to develop the severely affected areas.”

Spokesperson of the Libyan National Army (LNA) Ahmed al-Mesmary announced on Saturday that the move of oil ports and fields shutdown was made by Libyan people and that it is the Armed Forces’ duty to protect citizens.