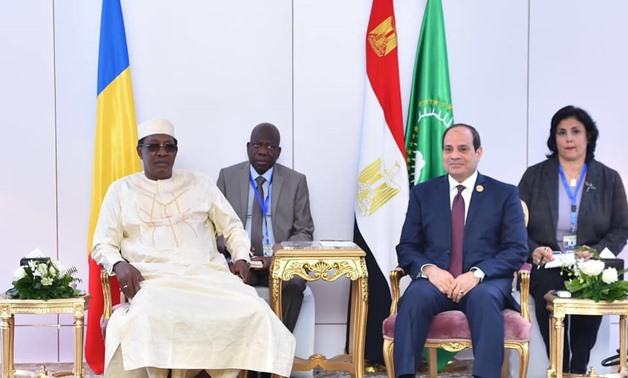 CAIRO – 11 December 2019: President Abdel Fattah el-Sisi on Wednesday said Egypt is ready to enhance bilateral cooperation with Chad in all fields, in order to back the efforts of economic and social development, during his meeting with his Chadian counterpart, the Egyptian Presidency.

On the sidelines of the first edition of Aswan Forum for Sustainable Peace and Development in Africa, Sisi met with President Idriss Déby, where he expressed Egypt’s willingness to contribute to reviving the Chadian economy through the Egyptian companies operating in the African nations, presidential spokesman Bassam Radi said.

Sisi also the readiness to receive more Chadian cadres to be involved in the capacity building programs supervised by the Egyptian Agency of Partnership for Development.

Sisi praised the strong relations between Egypt and Chad in light of Chad’s significant position in the Sahel zone that is directly connected to the Egyptian national security. Sisi affirmed that Déby’s visit represents an important opportunity to foster the bilateral ties.

For his part, Déby expressed his country's mutual aspiration to develop bilateral relations with Egypt at various levels, especially in trade exchange, technical support and joint security and military coordination.

Déby referred to the role of Al-Azhar, Egypt’s highest religious authority, in promoting cultural ties between the two countries through spreading the tolerant teachings of Islam and confronting extremist ideas.

The Chadian president hailed Egypt's role in contributing to achieving economic development and growth for African countries by organizing and hosting many special economic forums for African nations. He added that this would encourage opportunities to attract foreign investment to the continent.

The two leaders, during the meeting, also discussed developments in the region, as well as joint efforts to combat terrorism and extremist ideology.

They both agreed on continuing consultation and joint coordination on regional issues, including the Sahel-related issues, especially in light of the Egyptian chairmanship of the African Union this year.