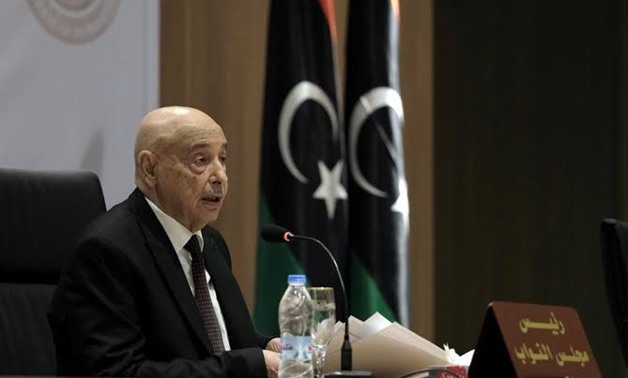 CAIRO - 9 December 2019: Speaker of the Libyan House of Representatives Aguila Saleh arrived in Cairo on Monday to meet with Speaker of the Arab Parliament Mishaal bin Fahm Al-Salami and his Egyptian counterpart Ali Abdel Aal.

Later on, the speaker of the Libyan House of Representatives will head to Greece upon a formal invitation to meet Speaker of the Greek Parliament Nikos Voutsis to discuss the reverberations of the MoUs on both countries.

On the other hand, Abdel Aal said in the plenary session on Monday that Egypt would not remain silent in the face of “threats to our interests or attempts to mess up with our borders.” The speaker described any attempt to compromise the land, air or maritime borders of Egypt as “madness,” warning that both the Egyptian leadership and people would fiercely deter such “foolish acts.”

Abdel Aal asserted, “We stand with the Libyan Parliament led by brother Aguila Saleh. Here in the House of Representatives, we support him and we support the Libyan [National] Army that combats terror.”

Greece expelled Libyan Ambassador to Athens Mohamed Younes al-Manfy over an MoU signed by Turkey and Tripoli Government - led by Fayez al-Sarag - on November 27 demarking the maritime borders between Libya and the Greek island of Crete. Egypt, France, Greece and UAE refuted the MoU.

CAIRO - 28 November 2019: Egypt, Cyprus and Greece announced, Tuesday that the two security cooperation and maritime MoUs signed by Turkey and Libya's UN-backed government, "has no legal effect". According to Egypt's spokesman for the Foreign Ministry Ahmed Hafez, Minster Sameh Shoukry called both of his Greek and Cypriot counterparts discussing the newly signed MoUs.