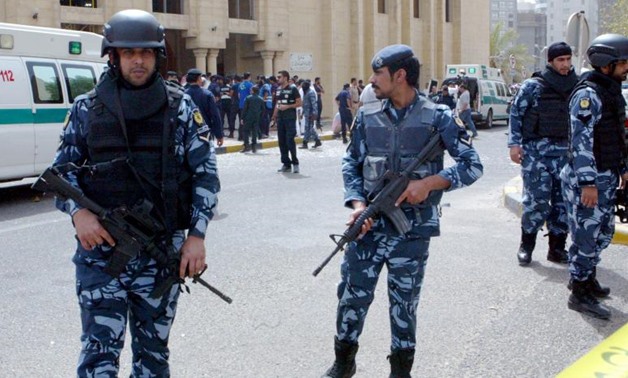 Kuwaiti security forces father outside the Shi’ite al-Imam al-Sadeq mosque in Kuwait City after it was targeted by a suicide bombing during Friday prayers on June 26, 2015 (AFP)

CAIRO - 8 December 2019: The Kuwaiti security forces are searching for two young men who assaulted an Egyptian residing in Kuwait's Salmiya region due to a traffic dispute, where they cut the arteries of his leg and escaped.

According to the Kuwaiti newspaper Al-Rai on Sunday, an Egyptian resident in Kuwait reached intensive care in Mubarak Hospital.

Hospital reports confirm that the Egyptian citizen was beaten by a cleaver and a fishing hook which resulted in deep cuts in hisleg arteries and wounds in his head.

According to a security source, the two young men forced him to stop as one of them pulled a cleaver from his car andthe other carried a fishing hook; they blatantly assaulted him.

The source said that a number of witnesses reported the incident to the operations of the Ministry of the Interior.

After awakening, the Egyptian young man provided a detailed description of the two young men and their vehicle to the police, pointing out that he did not know them.