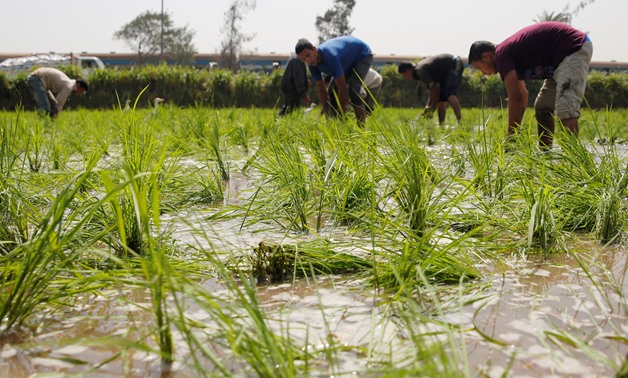 CAIRO –1 December 2019: The Egyptian Government is studying a proposal from the Japan International Cooperation Agency (JICA)to use the surface irrigation system in cultivating rice, said the Ministry of Water Resources and Irrigation in a statement on Saturday.

A meeting held by the state-owned National Water Research Center discussed the Japanese proposal; it has been agreed that this irrigation systemwillbe applied in two areas. The first place is Wadi el-Natroun, Beheria governorate (Delta) where the cultivation would depend on underground water, while the second place is in Sharqia's Enshas city where other crops besides Rice could be cultivated by the surface irrigation system, the statement added.

He talked about the Japanese experience in doubling the production of rice as one of the solutions to rice cultivation problems in countries that suffer water shortage.

Masahiko affirmed that one of the summit's outcomes is the Coalition for African Rice Development (CARD) going from 14 million tons to 28 million tons, and the goal was achieved last year.

TOKYO - 27 August 2019: Before the TICAD7 summit, the largest international business forum in Japan, kick off, Egypt Today spoke with Ambassador for TICAD Kiya Masahiko on Egypt's co-chairing of the summit, and how it can enhance Japan's contribution to Africa.

Despite decisions of reducing the rice-planted areas nationwide due to the water shortage crisis that Egypt faces, the government has increased the areas of lands to be used in rice cultivation in 2019.Head of the Rice Division in the Federation of Egyptian Industries (FEI) Rajab Shehata told the state-owned news agency MENA in September that the rice-cultivated area has been increased from 1.2 million acres to 724,000 acres to meet people’s needs.

In April 2018, Egypt's Parliament passed a law banning the cultivation of some crops that require a large amount of water amid fears that building the Grand Ethiopian Renaissance Dam (GERD) would cut the country's share of the Nile. The Parliament also approved the government's request to amend some provisions in Agriculture Law No. 53 of 1966.

It is worth mentioning that one feddan of rice consumes 7,000 cubic meters of water.

The average per capita consumption of fresh water declined by 1.5 percent in 2015/2016 and it reached 103.4 cubic meters, compared to 105 cubic meters in 2015/2014, according to the Central Agency for Public Mobilization and Statistics (CAPMAS) data.