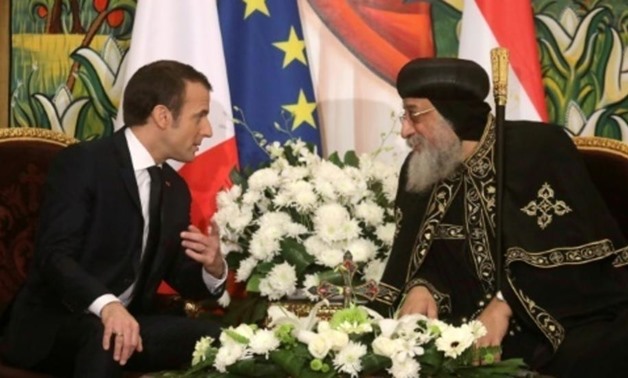 CAIRO – 19 October 2019: Egypt’s Pope Tawadros II visited the Élysée Palace and the French Senate on Friday as part of his first papal visit to France to meet with the Coptic community.

The Pope’s talk with President Emanuel Macron focused on the situation in Egypt, where the Pope said development in Egypt is improving but its road is still long. He added that there are many improvements to the situation of Copts, especially the new law facilitating the building of churches and President Abdel Fatah al-Sisi’s visits to the Cathedral every Christmas Mass, a visit that means a lot to the Coptic people in the country and the world.

They also tackled education, as the Pope expressed his wish that France supports the educational process in Egypt.

Meanwhile, head of the senate Gérard Larcher emphasized Pope Tawadros’ role is one of the most important figures of Christianity across the world, expressing his respect for the Coptic Church and its religious and historical weight, according to a statement by the Egyptian ambassador in Paris Ihab Badawy.

Larcher also noted the Egyptian counter terrorism role and the Egyptian-French relations, including parliamentary relations. The Pope, who began his visit to Belgium and France on Oct. 9, said that all terrorist operations, regardless how different in terms of their targets, whether churches, mosques, officers or judges, all aim at weakening the Egyptian national unity.

Pope Tawadros referred in his meeting with Larcher to efforts of the Egyptian government to renovate churches affected by terrorist attacks.

The Pope will later visit León and Marseille.