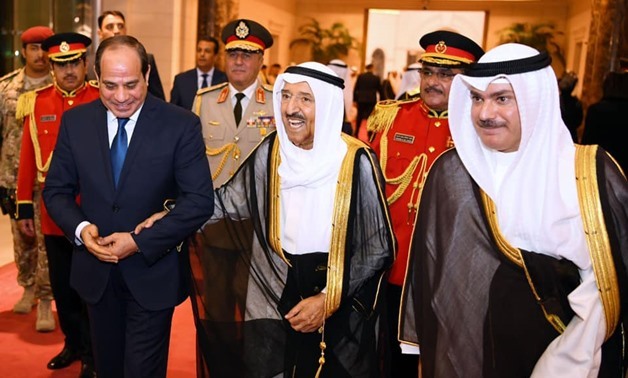 By: Egypt Today staff
CAIRO – 16 October 2019: President Abdel Fattah El-Sisi on Wednesday expressed hopes for Kuwaiti Emir Sheikh Sabah al-Ahmad al-Sabah to get well soon and wished him speedy recovery as he arrived back to Kuwait after a health setback.

“I was so glad to hear about the return of His Excellency the Kuwaiti Emir and we ask god to preserve Kuwait’s safety and stability under the wise leadership of Sheikh al-Sabah,” Egyptian ambassador to Kuwait Tarek Al-Quni said in a statement.

“Through this statement, I’d like to extend President Abdel Fattah El-Sisi’s greetings to his brother, His Excellency the Emir of Kuwait, and his wishes for him to recover and enjoy full health,” the statement added.

The emir’s office said in August that Sheikh Sabah had suffered a health setback while in Kuwait, without providing details.

During a September meeting between President Sisi and the Kuwaiti Emir, the Egyptian leader said the security of Kuwait and the Gulf is inseparable from Egypt's own national security.

Sheikh Sabah hailed Egypt's role in "supporting the security and stability of Arab countries and its efforts to enhance joint Arab action at all levels.”

The Egyptian president stressed the need for continuing to build on the momentum of bilateral cooperation in various fields, as well as pushing forward mechanisms of mutual consultation and coordination on all issues and developments in the Arab region.