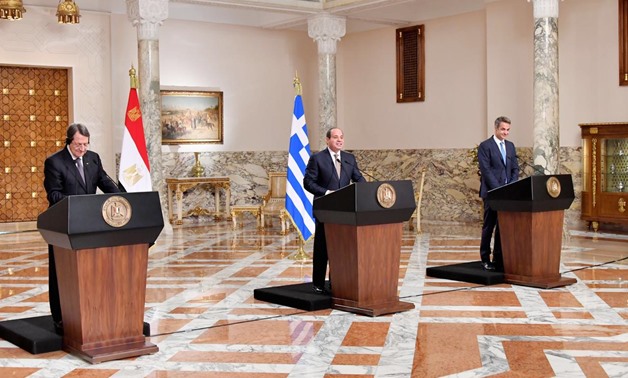 CAIRO - 8 October 2019: In a joint press conference with President Abdel Fatah al-Sisi in Cairo on Tuesday, Greek Prime Minister Kyriakos Mitsotakis and Cypriot President Nicos Anastasiades gave emphasis on the trilateral cooperation mechanism and its impact on the region.

“We discussed the progress on the trilateral cooperation mechanism in the realms of defense, energy, environmental protection, and handling expats,” Cypriot President Anastasiades stated declaring that the meeting is held in light of regional developments.

Anastasiades asserted that energy is the most important aspect of the trilateral cooperation mechanism stating that the three states desire to push cooperation in the gas exploration sector. “Cooperation between the three countries in the energy sector depends on resource extraction,” the Cypriot president added.

Greek Prime Minister Mitsotakis asserted that the trilateral cooperation mechanism between the three states will persist. “I am confident that the positive messages and the fruitful outcomes will be a glowing light for international developments,” the Greek prime minister said.

Cypriot President Anastasiades said that cooperation with Egypt and Cyprus is aimed at bolstering prosperity and regional stability highlighting openness to cooperate with all countries that prioritize peace. Anastasiades also asserted that the international community has to deploy more efforts to combat terrorism and extremism.

The Cypriot president added that the regional cooperation mechanisms between Egypt, Greece and Cyprus is aimed at developing a vision that would achieve peace and stability in the region on a larger scale.

The Cypriot president also welcomed encouraging trilateral investments by the private sector and adopting the necessary mechanisms such as signing an agreement that prevents double taxation. Anastasiades also looks forward to sign an MoU between the Cypriot Ministry of Foreign Affairs and the Egyptian Diplomatic Institute.

Greek Prime Minister Mitsotakis affirmed that the stance of his country matches that of Egypt on Libya, Syria and Palestinian Cause. “I am optimistic because Egypt, Greece, and Cyprus constitute a triangle of security and stability eastern the Mediterrenean,” Mitsotakis added.

Mitsotakis said Egypt is not just a country but a friend and a pivotal state in the region that serves as a catalyst for stability as it has an effective role in the Organization of Islamic Cooperation (OIC) and Africa, Mitsotakis highlighted. “Egypt is also an ally in war against terrorism, and we have to take that into consideration in the European Union. We will work in the near future on strengthening ties between the European Union and Egypt,” the Greek prime minister said.

The Greek prime minister lauded the strong relations between Egypt and Greece and thanked President Sisi for the warm reception and for hosting the summit in Cairo.

Anastasiades expressed gratitude to the Egyptian president for supporting the Cypriot people against Turkish threats. “On behalf of the Cypriot people and the government, we express profound gratitude at the support of Egypt and its president to Cypriot efforts aimed at barring occupation and restoring the unity of Cyprus in a way that ultimately guarantees the independence and sovereignty of our homeland away from any legacy or external powers,” President Anastasiades said.

The Cypriot president criticized Turkey and expressed rejection of its exploration of gas in Cypriot water asserting that Turkey’s unilateral acts threaten security and peace eastern the mediterrenean.

“Those acts are a blatant violation of Cypriot rights and international law. We are amid the use of all diplomatic means to stop Turkish violations and to guarantee the protection of Cypriot sovereignty,” President Anastasiades said.

Both heads of state held bilateral meetings with Egypt's president on the sidelines of the summit to discuss thriving relations and to confirm the necessity of coordination and consultation over regional affairs and matters of mutual interest.