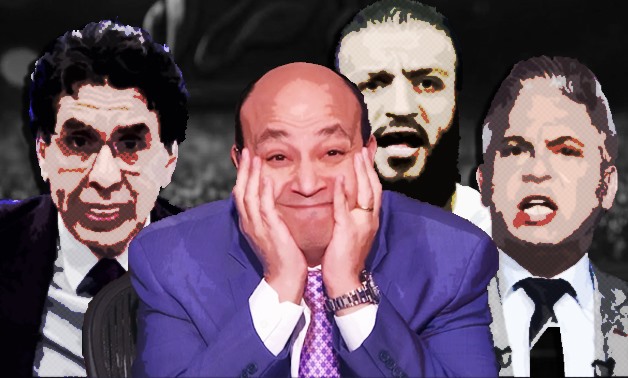 CAIRO – 24 September 2019: Fake news can seem so believable that simple people have a hard time determining the truth, which is why the Muslim Brotherhood, with the support of certain countries, has been relying heavily on the publication of fake news, to sow discord and ignite chaos in Egypt.

Fake news stories present a significant risk to people, industries and governments, especially amid a war against terrorism and an ongoing plan that witnessed a remarkable improvement in the country’s economy.

Egyptian media figure Amr Adib on his program al-Hekaya (The Story) has tricked the Muslim Brotherhood and their affiliated media outlets into exposing the way they promote fake news and seek to destabilize the country.

During his show, on Sunday, Adib hinted that he is going to host “Mahmoud Abdel Fattah El Sisi”, "That's right, Mahmoud El Sisi," Adib said, without much elaboration, pushing some people, including the Muslim Brotherhood, to think he is going to be hosting the President Sisi’s son.

Immediately, Muslim Brotherhood web trolls, newspapers and media outlets have started promoting the news as an attempt by Egyptian media to “polish the picture of Mahmoud El Sisi and promote for him as the coming president of Egypt.”

“How come you attack the Muslim Brotherhood on Sept. 20 for publishing news about intentions to pass the ruling to the President’s son and then announce that you’re going to host him on Sept. 22?” Nasser wondered on his show.

Suddenly, something that Nasser heard in his earpiece made his face turn yellow. It was not Mahmoud El Sisi, the President’s son, who is Adib hosting, but another Mahmoud El Sisi, who is the managing director to a chain of pharmacies across Egypt.

In the following video, Adib is broadcasting how Nasser, and the Muslim Brotherhood media, used his announcement to spread fake news in an attempt to spread chaos and anger in Egypt. Muslim Brotherhood Youtuber Abdullah Al-Sharif also claimed on Twitter that the Egyptian media is afraid and is seeking to “calm the streets” at any cost by hosting Mahmoud El Sisi. Moreover, Muslim Brotherhood presenter Mohamed Gamal Helal, who in one of his tweets described MB leader Mohamed Morsi’s speech as listening to the Quran, said hosting Mahmoud El Sisi is similar to the Gamal Mubarak scenario.

Another face of the Muslim Brotherhood, Moataz Matar, who works for the Turkey-based opposition al-Sharq TV channel, also sought to spark anger by promoting that Adib will be hosting the President’s son to calm the streets even though he has no pictures available.

Social media reactions celebrated Adib for what they called a “well played” move by him to expose how the Muslim Brotherhood promote fake lies and news to serve their scheme to bring down the country and drive it into chaos.

In the following video, TV Presenter Amr Adib has displayed the recording, along with a video showing some persons positively responding to his demand, by which he aims at launching a cyber attack against the leadership.

Egypt has designated the Muslim Brotherhood group as a terrorist organization late in 2013, after Mohamed Morsi, who also served as head of the terrorist group, was ousted following a popular uprising to protested the ruling of the group.

Moreover, MBC Masr satellite channel broadcast on Friday a footage, which showed one of the Muslim Brotherhood leaders calling on supporters to gather near their houses and then fill the cities' squares.

However, despite the propaganda and videos of MB sympathizers and members protesting, media correspondents reported that there were no signs of protests at the main Cairo square of Tahrir, the focal point of 2011 mass protests.

Some scattered Muslim Brotherhood protests came in response to online calls by Brotherhood-linked media outlets and Egyptian businessman and unrecognized actor Mohammad Ali, who had fled the country to Spain alleging in viral videos fake information to sow discord and serve the Brotherhood’s scheme.

“Egypt is recovering and resolutely facing challenges on a daily basis. Realities are different from what the externally funded media propagate."

The Brotherhood and their terrorist loyalists have been inciting violence in Egypt and sought to derail President Sisi’s strenous efforts to re-establish security, stability and economy in the country.

Media outlets loyal to the Brotherhood, based in Turkey and Qatar, have over recent days been inciting Egyptians to take to the streets to demand President Sisi to step down.

President Sisi, who took office in 2015, has largely restored stability to Egypt and revitalize its battered economy through an economic plan that laid the foundations of the Egyptian economy that has been showing remarkable progress and improvement in recent years.