Abe thanks Sisi for contributing to TICAD Summit success 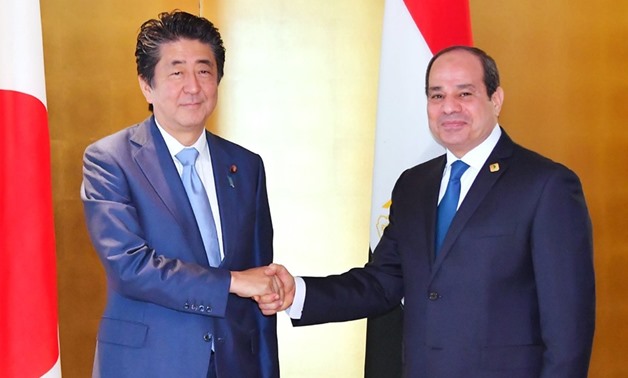 Abe said, during the summit's closing session, that the participating countries have endorsed the Yokohama Declaration 2019, which is considered to be a road map for the future and constructive cooperation between Japan and Africa.

The participants in the summit stressed the need to give priority to the private sector to provide jobs for youth and strengthen their capabilities, and promote technology and innovation, the prime minister said.

Abe said that the youth of Africa are invited to visit Japan to study and learn about the Asian country, through Japanese initiatives, adding that 2,500 Africans were invited to Japan to participate in many fields.

He also expressed intentions to host 9,000 African youth for human resources training, and to support and encourage them to achieve the aspiration of their people.

The stability of the Middle East is of great importance to Japan, Abe said, adding that Japan supports dialogue with Iran to ease tensions in the Middle East.

TICAD was launched in 1993 by the Government of Japan, to promote Africa’s development, peace and security, through the strengthening of relations in multilateral cooperation and partnership, particularly with the Japanese nation.

Abe earlier has voiced deep appreciation of the ancient Egyptian civilization which is greatly admired by his people, during a meeting with President Sisi on Wednesday, presidential spokesman Bassam Radi said.

He also praised the achievements Egypt has accomplished so far in its development process and the tangible progress it has made in its economic reform program as well as the mega national projects it has recently been implementing.

Abe also noted that the current positive changes in Egypt have significantly contributed to attracting more Japanese investments to its market, the spokesman said.

He pointed out that Abe also asserted that Japan attaches special importance to its relationship with Egypt, especially at the economic and political levels, applauding the pivotal role which Cairo plays in the region and most particularly in the Middle East area.