The accident, which took place in Damanhor, Beheira, damaged seven cars, including two cars that appeared severely destroyed, while a pickup truck overturned. Luckily, the bus passengers were reportedly unharmed.

The security authorities and ambulance vehicles reached the scene subsequently to make sure players and other citizens involved in the accident were not injured.

Ghazl al-Mahalla club plays at the second tier of the Egyptian football, and was so close to seal promotion to the Egyptian First division last season. It reached 1974 Cup of Africa Champions League Final but lost to Congolese CARA Brazzaville. It also won 1973 Egyptian League title, becoming the only team outside Egypt's busiest cities Cairo and Alexandria to reach the title.

According to World Health Organization in 2012, Egypt loses over 12,000 lives every year in road crashes.

"Egypt has a road traffic fatality rate of 42 deaths per 100,000 population. Majority (48%) of those killed are passengers of four-wheelers though pedestrians also constitute a significant proportion (20%) of these fatalities," the WHO report said.

State Central Agency for Public Mobilization and Statistics (CAPMAS) recorded 11,098 road accidents in 2017, but said that number dramatically dropped in 2018 to 8,480 cases.

Nearly 1.35 million people worldwide die annually as a result of road accident, the WHO said in a statement in May this year, marking the fifth Global Road Safety Week.

"Road traffic injuries are now the leading killer of children and young people aged 5-29 years. This is an unacceptable price to pay for mobility," the statement read.

"Whether we travel as pedestrians, cyclists, motorcyclists or drivers, all of us - as parents, students, employees, volunteers and concerned citizens – can be leaders for road safety. When the right to a safe journey is a priority, everybody wins!" it added. 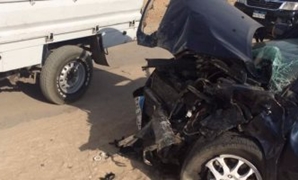