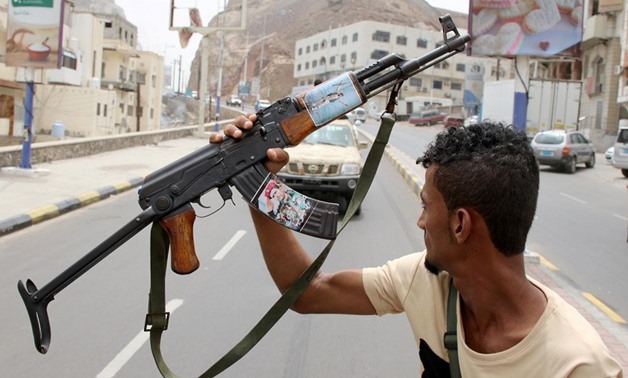 FILE PHOTO: A member of Yemen's southern separatist holds his weapon with a picture of Muneer al-Yafee during a funeral of Brigadier General Muneer al-Yafee and his comrades killed in a Houthi missile attack, in Aden, Yemen, August 7, 2019. REUTERS/Fawaz

ADEN - 10 August 2019: Fierce fighting broke out on Saturday in Yemen’s southern port of Aden between nominally allied forces that have turned on each other, exposing rifts in a pro-government military coalition and complicating U.N. efforts to end a devastating war.

Residents said battles resumed at dawn, marking a fourth straight day of clashes between southern separatists and government forces in the city that hosts the temporary seat of Yemen’s internationally-recognized authorities.

The combatants are both part of the Saudi-led coalition that has been battling the Iran-aligned armed Houthi movement in Yemen since March 2015. The war has killed tens of thousands and pushed the poorest Arabian Peninsula nation to the brink of famine.

Saturday’s clashes centered on the all-but empty presidential palace in the predominantly residential Crater district, near Aden International Airport and in a neighborhood where the interior minister lives, residents said.

Sources told Reuters the minister, Ahmed al-Mayssari, left his home during a lull in fighting the previous night.

The Norwegian Refugee Council said the battles have trapped civilians in their homes with dwindling supplies of food and water. The aid group said prolonged fighting in Aden, a gateway for commercial and aid supplies, could impact efforts to tackle the humanitarian crisis gripping the rest of the country.

The clashes began on Wednesday after the separatists accused an Islamist party allied to President Abd-Rabbu Mansour Hadi of complicity in a missile attack on a military parade, one of three separate attacks that targeted southern forces.

The separatists and Hadi’s government are nominally united in their battle against the Houthis, who removed Hadi from power in the capital Sanaa in late 2014, but they have rival agendas for Yemen’s future.

The United Nations is trying to de-escalate tensions countrywide as it tries to implement a peace deal in the main port city of Hodeidah further to the north, to pave the way for wider political talks to end the war.

The Houthis have stepped up cross-border missile and drone strikes on Saudi Arabia, which leads the Western-backed, Sunni Muslim pro-government coalition.

The group controls Sanaa, Hodeidah and other major urban centers while Hadi’s government holds Aden and a string of western coastal towns.

The Aden violence comes after key coalition member the United Arab Emirates, which has armed and trained thousands of southern separatist fighters, scaled down its military presence in Yemen amid pressure from Western allies to end the war and concerns about rising tensions with Iran in the Gulf.

The Yemen conflict is widely seen in the region as a proxy war between Saudi Arabia and Iran. The Houthis deny being puppets of Tehran and say their revolution is against corruption.