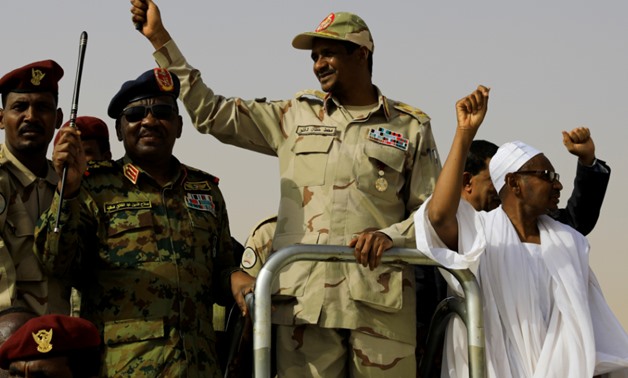 Lieutenant General Mohamed HamdanDagalo, deputy head of the military council and head of paramilitary Rapid Support Forces (RSF), greets his supporters as he arrives at a meeting in Aprag village, 60 kilometers away from Khartoum, Sudan, June 22, 2019. RE

CAIRO – 23 June 2019: Egypt, the UAE, and Saudi Arabia have helped the Sudanese people without imposing any agenda on Sudan, said Vice-President of the Transitional Military Council (TMC)Mohamed Hamdan Dagalo(Hemeti) in a press conference on Saturday.

He added that Sudan participates in the Saudi-Led Arab Military Coalition with 30,000 soldiers in Yemen to fight terrorists and combat illegal migration.

Hemeti said that the TMC does not seek to seize power in Sudan, calling for forming a new caretaker government until power is handed over to an elected government through elections.

Since the ouster of former President Omar al-Bashir on April 11, 2019, the interim military council has ruled the country, saying that its ruling could last for two years until a new democratic government is elected.

Hundreds of Sudanese people have protested in a number of governorates to press on the TMC to hand the power to a civilian government.

However, the situation in Sudan has escalated since June 3, when dozens of protesters were killed by security forces while violently dispersing a sit-in outside the headquarters of the Ministry of Defense.

In his speech at the Ministerial Regional Partners of the Sudan Meeting, which convened in Addis Ababa on Thursday, Egyptian Foreign Minister Sameh Shoukry said that Sudan turmoil should be ended by a political and comprehensive dialogue between the various Sudanese parties.

On June 6, 2019, the AU Peace and Security Council (PSC) suspended Sudan’s participation in the AU’s activities over the Sudanese deterring political situation, the PSC said in a statement.

The suspension will remain until “effective establishment” of a Civilian-led Transitional Authority, the council said, adding that the formation of a civilian regime is “Sudan's only way out of the current crisis.”