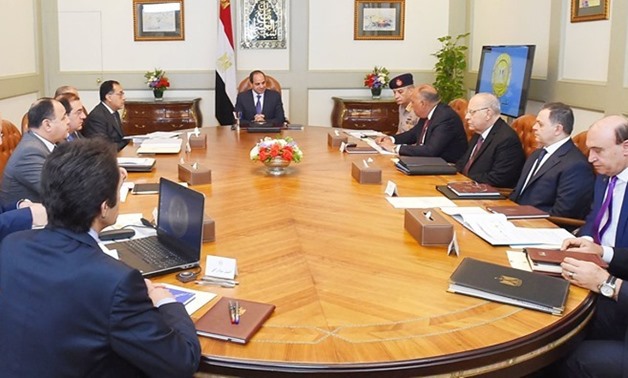 CAIRO – 12 May 2019: President Abdel Fatah al-Sisi met with Prime Minister MostafaMadbouli and a number of ministers and high-level officials to follow up on the government's efforts to provide the necessary commodities for citizens during Ramadan with proper prices.

Also, the General Intelligence chief,chairman of the Suez Canal Authority, head of the Administrative Control Authority (ACA)and the president's advisor for urban planning attended the meeting.

The meeting tackled the latest developments of subsidy and the filtration of the lists of beneficiaries from subsidy cards, so that the system becomes more efficient, presidential spokesman BassamRadi said.

During the meeting, the president directed intensifying market control efforts through monitoring outlets and enhancing the role of consumer protection bodies to ensure citizens' access to various goods, Radi said.

Furthermore, the meeting reviewedthe latest developments in the Economic Zone of the Suez Canal, the efforts exerted to attract investments, and a report about the ports and industrial and logistic areas being established in accordance with the highest international standards.

In this regard, Sisidirected working on developing the Suez Canal's Economic Zoneand facilitating the procedures for investors to attract more investments, Radi said, adding that developing the Economic Zone comes within the framework of the state's efforts to provide more employment opportunities especially for young people.

Moreover, the president stressed the need to adhere to the timetables set for the completion of the national projects.