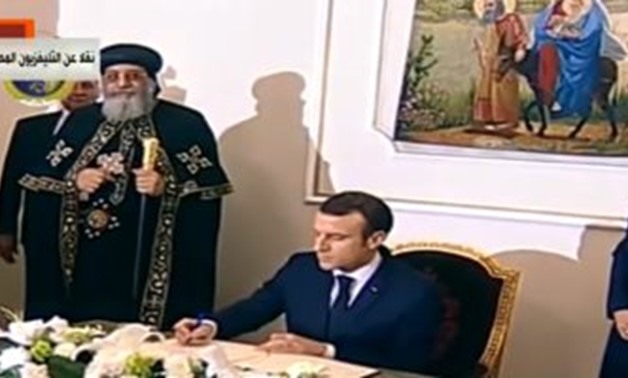 CAIRO, Jan 29 (MENA) - French President Emmanuel Macron asserted on Tuesday that he was keen on visiting the Orthodox Cathedral in Egypt in view of his respect and recognition of its value in the past and future of the country.

The French president's remarks were made during his visit to the Orthodox Cathedral premises in Cairo's Abbassiya district.

Macron said he wished to see Pope Tawadros II, the 118th Pope of Alexandria and Pope of the See of St. Mark, noting that Egyptian Copts are important to France.

He noted that he was well aware of the suffering of Copts from terrorism over the past few years, praising the efforts of the Egyptian government to secure and protect them.

The French president also voiced happiness over meeting with Pope Tawadros in light of the circumstances Egypt is passing through, noting that diversity and pluralism in Egypt and the Middle East region are basics for achieving peace.

The French president expressed hope for beefing cooperation between the two countries in the field of education and libraries, asserting that education is a key issue for his country and Egypt.

He underlined the importance of education for building a better future of the coming generations and ascertaining that they will be able to live in peace and prosperity.

Macron also highlighted the importance of investing in human capital and personality building, asserting that France was committed to achieving this goal through better cooperation with Europe and the entire world, especially the African continent.

He asked the pope about his vision on the inter-faith dialogue and what France could do in cooperation with Egypt in the field of education.

Responding to Marcon's question about education, Pope Tawadros said the Coptic Church is considered one of the oldest popular institutions in Egypt and it views education as a main problem of the society and a key solution to many of the challenges and ailments it is facing.

He also spoke about the problem of the swelling population in Egypt which is highly affecting all national development projects.

Building schools, updating curricula as well as training teachers could be the means for resolving the problem of overpopulation, said the pope, adding that France has a vast expertise in this regard.

Pope Tawadros asserted that the French schools in Egypt have a good impact on the quality of education in general, adding that the Church is trying through small-scale projects such as schools, clinics and hospitals to contribute to serving the community.

He also stressed that peace and stability could never be achieved without dialogue. The pope made it clear that human relations can be further enhanced through dialogue.

The pope said "the West represents the world's mind, while the East is its heart, therefore there should be dialogue between them".

Pope Tawadros also welcomed all forms of cooperation with France, asserting that the French government and people are the closest to Egypt, noting that dialogue and education are two basic elements for enjoying peace and stability in the world.

The pontiff went on to say that though Coptic churches came under several terrorist attacks, yet they have always been keen on maintaining their image as beacons of social unity.

Meanwhile, Macron said Egypt is facing a huge challenge which is the population overgrowth, asserting that this requires an intellectual and cultural battle to be courageously led by President Abdel Fattah El Sisi along with the Egyptian government.

As per the dialogue between the West and the East, Marcon said "dialogue is a necessity as we should always make it a point to listen to each other," noting that this is the spirit with which he leads France.