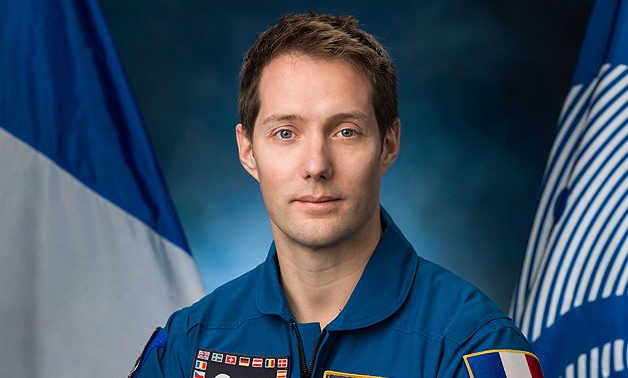 French astronaut Thomas Pasquet gives an interview to AFP on May 30, 2017 - AFP

NASA TV showed recovery crews swiftly helping the pair out of the craft and whisking them away from the landing site as the sun began to set on a hot summer's evening in central Kazakhstan.

The pair undocked as the International Space Station (ISS) orbited above the Chinese-Mongolian border, marking the beginning of a 400-kilometer (250-mile) descent back to Earth lasting just over three hours.

"All is well. The landing has taken place," a spokesman for Russian mission control told AFP after the landing at 8:10 pm local time (1410 GMT).

"All the operations for the descent from orbit and landing went to plan. The crew members feel well after returning to Earth," mission control said in a statement.

"It's been a fantastic adventure and amazing ride," 39-year-old Pesquet tweeted a few hours before the undocking.

Pesquet and Novitskiy arrived at the station on November 20 for a six-month mission with American Peggy Whitson, who holds the NASA record for cumulative time spent in space.

Novitskiy and Pesquet came home in a spacecraft that had one empty seat -- a result of Roscosmos's decision last year to temporarily reduce the Russian presence on the space station from three to two cosmonauts to cut costs.

Due to that decision, NASA veteran Whitson did not join the pair on the journey home as originally planned, and will instead remain on the ISS until September after NASA extended her stay.

French president Emmanuel Macron called Pesquet after the landing, telling him "bravo to you," while the French astronaut told him "It's going well, I'm getting used to gravity. Even just holding this telephone is difficult."

Pesquet voted in the French elections from the orbital lab and is set to meet Macron once he completes post-mission work at the ESA astronaut centre in Cologne.

Pesquet won plaudits at home and abroad as well as over half a million followers on Twitter over the course of his preparations and time in space.

"We saw that he is very qualified, a real professional... with a great desire to work in space," Yuri Malenchenko, a retired cosmonaut who worked with Pesquet in Russia's Star City, where ISS astronauts and cosmonauts train for missions, told AFP.

"These qualities were confirmed during the flight," he added.

Pesquet himself underlined the "fragility" of Earth in an interview to AFP from the ISS.

"There are things that one understands intellectually, but which one doesn't really get," he said via video link, gently floating around in the zero gravity of space.

When it comes to global warming, "we talk of two degrees (Celsius) or four degrees -- these are numbers which sometimes exceed human understanding.

"But to see the planet as a whole... to see it for yourself... this allows you to truly appreciate the fragility."

But that is far short of the 437-day mission by Russian cosmonaut Valery Polyakov, aboard the old Soviet-Russian space station Mir, from January 1994 to March 1995.

"A last picture of Paris from the side... but you can never go wrong with Paris! Guess what time it was by the shadows '#workitoutlikeadetective#", he posted on June 1.