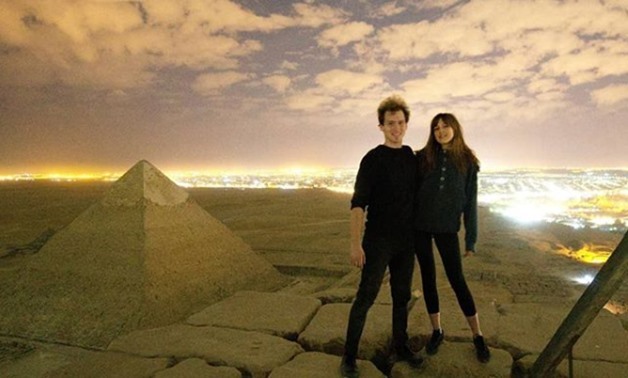 CAIRO - 13 December 2018: Egypt's Ministry of Interior arrested a camel driver and another girl accused of helping two Danish tourists climb the Great Pyramid of Giza. The tourists photographed themselves naked allegedly on top of the 139-meter pyramid.

An investigation team was formed in cooperation with the Interior Ministry to investigate the issue. The 33 year old Danish photographer reached Egypt on November 19 and left on December 4, according to the investigation.

In an interview with Copenhagen-based Ekstra Bladet, Andreas Hvid said he has always dreamt of climbing the Great Pyramid and taking naked photos over its top. He added that he is now very upset as some people are mad at him.

Hvid said he did not have sex on top of the Pyramid, confirming that they have taken one photo while they were naked.

The Danish photographer said he did not intend to mock a historic or religious symbol, adding that he will not visit Egypt in the coming period in order not to get arrested.

The explicit video claimed to be filmed atop the Great Pyramid of Giza by a Danish photographer has been referred to Egypt’s top prosecutor to investigate its authenticity.

Climbing the Giza Plateau is considered illegal, according to the head of the archaeological site, who ruled out the Danish couple have climbed up the Khufu Pyramid amid the tight security presence.

In the video description, Hvid wrote “In late November 2018, a friend and I climbed the Great Pyramid of Giza (a.k.a. Pyramid of Khufu, Pyramid of Cheops). Fearing to be spotted by the many guards, I did not film the several hours of sneaking around at the Giza Plateau, which led up to the climb."

The video has been circulated on social media, with some angry comments describing it as tarnishing the historic site.

The director of the Pyramids archaeological area Asharf Mohey described the video as “fake and unreal,” saying that climbing the Pyramid is impossible due to restrictions. Mohey suspected the video's authenticity, referring to a “strange” light appearingin the footage that does not resemble the real view of the site that closes every day at 5p.m.