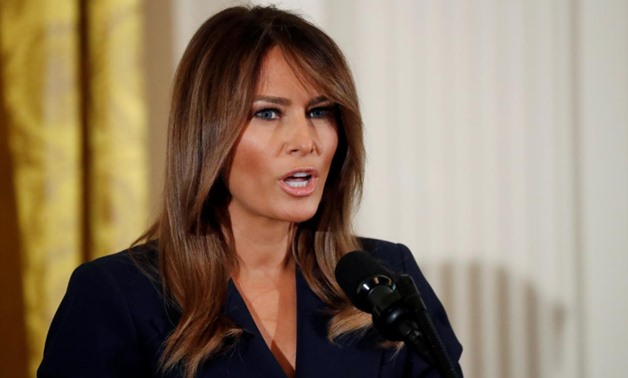 First lady Melania Trump participates in a celebration of military mothers and spouses at the White House in Washington, U.S., May 9, 2018. REUTERS/Leah Millis

CAIRO – 27 September 2018: First lady Melania Trump announced embarking on an African tour starting October 1, where she will visit four “beautiful and very different” countries, according to the Associated Press.

The first lady will visit Ghana, Malawi, Kenya, and Egypt, where she will discuss child care on her first extended solo international mission without the American president.
The first lady said she looks forward to spreading the message of her “Be Best” child-welfare initiative. She launched the campaign in May to focus on the overall child well-being, with an emphasis on opioid addiction and online behavior.

During the meeting, Trump welcomed the Egyptian president, saying "It’s a great honor to be with President Sisi, our great friend from Egypt."

Sisi expressed his pleasure to meet Trump, saying "Being here and having this meeting really states the magnitude of the Egyptian-American relationship."

"I commend you for all the accomplishments achieved in the United States within less than two years," Sisi said. He added that Egypt has had "a long stable relationship [with the U.S.] for 40 years now, and during President Trump’s rule, Egypt has received more support."

Trump also congratulated the Egyptian leader for "the outstanding job he did with respect to terrorism, saying "you’re working very hard on that. It’s not easy. You’re at the forefront but you’ve done an outstanding job."

Sisi asserted that Egypt "will be able to eliminate terrorism" with the help of the United States. He pointed out that fighting terrorism "has been an obligation that [Trump] has made very clear since taking office and during his presidential campaign," stressing that Egypt supports him in this.