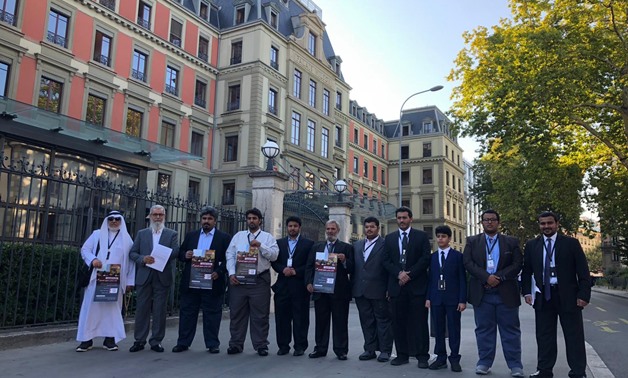 GENEVA – 18 September 2018: A delegation from the Al-Ghufran Tribe, one of the biggest tribes in Qatar, staged a protest Tuesday in front of the United Nations in Geneva to denounce the crimes of the Qatari regime who has revoked their nationality, displaced and tortured members of the tribe.

The protest a wider move by the tribe on the sidelines of the 39th session of the UN Human Rights Council.

A delegation representing Al-Ghufran tribe, one of the biggest tribes in Qatar, which has been subject to systemic discrimination at the hands of the Qatari authorities, handed a letter Monday to the Office of the UN High Commissioner for Human Rights, discussing their deteriorating situation.

The center described the Qatari violations as “a first” in international law and policy.

According to Sky News, Ghufran already issued a first complaint against Doha last September in which they explained how Qatar violated their rights. “We wonder about the reason behind ignoring our first complaint,” the Qatari tribe’s spokesperson, Jaber Abdel Hady, told Sky News on Friday.