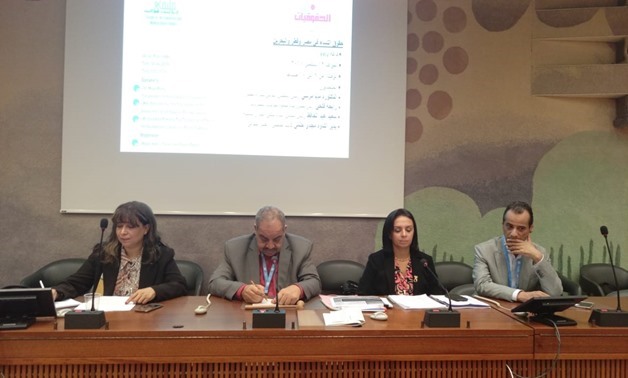 GENEVA – 16 September 2018: Association of the Egyptian Female Lawyers (AEFL) and the Dialogue for Development and Human Rights Forum delegation, which held a number of seminars on the margin of the Human Rights Council’s 39th Session, sat down with the UN Committee on Enforced Disappearances to discuss the effects of the issue is Egypt and how to best handle it.

The meeting, which was quite lengthy, addressed some of the allegations regarding some political activists and well as some of the actions taken by Qatari-funded Muslim Brotherhood-affiliated groups, according to Said Abdel Hafez, Chairperson of the Forum for Development and Human Rights Dialogue. The Egyptian delegation explained to the committee that politicizing the issue negatively affects the efforts of the United Nations.

Along the same lines, Abdel Hafez said that forced disappearance, like the Muslim Brotherhood describes, only exists in their sick, confused minds, assuring that the UN has no negative comments or remarks on the situation.

Rabha Fathy, Chairperson of the Association of the Egyptian Female Lawyers (AEFL), recommended that the international standards must be taken in mind and applied when dealing with reports of missing persons or when dealing with this issue at all.

Building on this, Magdy Helmy, journalist and member of the Egyptian delegation in Geneva, pointed out to the lack of cooperation between the team focusing on forces disappearances and the UN Refugee Agency on the issue of illegal immigration.

“Thousands of young people are dyng at sea or trying to cross the dessert with no ID on them, meaning that they cannot be identified easily. What often happens is that their families, to rid themselves of any liability, report them missing; meanwhile, there are thousands of corpses that have not been identified due or that have [partially] dissolved in the sea,” Helmy said.

“There is a need for coordination between UN bodies to identify these people and uncover the fate of thousands of people who are thought to have disappeared by force in the African continent,” continued Helmy.

Addressing the argument, which has been brought forth by some people, that there is short-term forced disapperence that is being operated by Egyptian authorities, Helmy explained that the Egyptian authorities do not need to do this due to the fact that the State of Emergency Law is not in place, giving authorities the right to place any individual that is thought to threated public security in an administrative detention for 60 days. “There is not need for the state to resort to this, especially that the emergency state is renewed by the Egyptian Parliament every three months,” stated Helmy.

A seminar of forced disappearances

Egyptian Organization for Human Rights (EOHR) held Wednesday a seminar titled ‘Forced Disappearance in Egypt’ on the margins of the 39th Session of the International Council for Human Rights held in Geneva, Switzerland.