FILE – John, Susan Cooper at a resort in Hurghada

By: Egypt Today staff
CAIRO - 7 September 2018: Egypt’s Attorney General Nabil Sadek ordered Friday to hand the bodies of late two British tourists to the representative of the UK embassy in Cairo, after finishing the forensic examination.

In official statement released Friday, the general prosecution affirmed that investigations are going on, to determine the cause of the two tourists’ death in the Red Sea’s resort of Hurghada, to publically announce the investigations’ results in due course.

John and Susan Cooper, British tourists, died at different times in Hurghada on August 21, as a result of circulatory collapse, according to statement of Red Sea governorate.

Four days following the incident, General Prosecution’s office affirmed in official statement that no toxic gas emissions or leak were detected in the room, based on reports of a technical team that has examined the hotel room. All equipment in the room are operating normally, the statement added.

Egypt’s government affirmed its full commitment to announce the results of the British couple death’s investigation.

During a meeting held between Egypt’s Prime Minister, Mostafa Madbouly, and Minister of Tourism Rania al-Mashat and Thomas Cook Group Chief Executive Peter Fankhauser, the tragic deaths of John and Susan Cooper were discussed, as both sides affirmed their commitment and earnestness to the investigation.

In a statement issued by Thomas Cook Travel Company, it was stated that Fankhauser reiterated his personal commitment, and the commitment of everyone at Thomas Cook, to get to the bottom of what went wrong.

“It was a constructive discussion and the Prime Minister and Minister of Tourism gave their reassurance that they are doing all that they can to ensure the investigation is thorough, transparent and provides the answers we need as swiftly as possible,” The statement stated.

Fankhauser also met with the then-British Ambassador to Egypt, John Casson, and Deputy Head of Mission, Helen Winterton, to discuss their continued cooperation to assist the Cooper family and work with the Egyptian authorities to support UK tourists in Egypt.

“We will continue to speak to the Egyptian authorities and the Foreign and Commonwealth Office to ensure that we work together and priorities the very best interests of the Cooper family. The well being of our customers in Egypt remains of paramount importance,” Thomas Cook affirmed in its statement.

CAIRO - 24 August 2014: No signs of criminal resistance or violence exists on the bodies of the British couple who died on Tuesday in Hurghada, the initial forensic report stated according to Egypt's Attorney General Nabil Sadek. 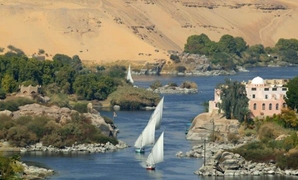