In pics: Hundreds of thousands perform Eid prayers in squares

By: MENA
CAIRO - 21 Aug 2018: Hundreds of thousands of Egyptians performed on Tuesday Eidul Adha (Greater Bairam) prayers in public yards and squares across the country along with senior municipal and governmental officials and clerics.

In North Sinai, thousands performed the prayers amidst tight security measures in the presence of Governor Abdel-Fatah Harhour and local political and executive leaderships.

In El Wady El Gadid (the New Valley), thousands of citizens performed the Eid prayers in 53 public squares and 640 mosques in the presence of Governor Mohamed el Zamallout and provincial officials.

In Beheira Governor Gamal el Rashidy joined thousands of citizens and officials in performing the prayers at Damanhour stadium.

The Beheira security director ordered raising the state of alert during the holidays with stepping up control over markets to make sure that goods are available for citizens at affordable prices.

In Ismalilia, thousands of people performed the prayers in public squares in the presence of Governor Yasin Taher and political, security and executive officials along with Muslim ulemas. 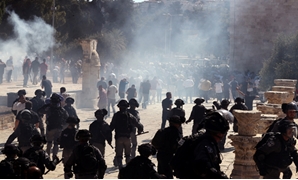 Health Ministry declares emergency in hospitals ahead of Adha celebrations