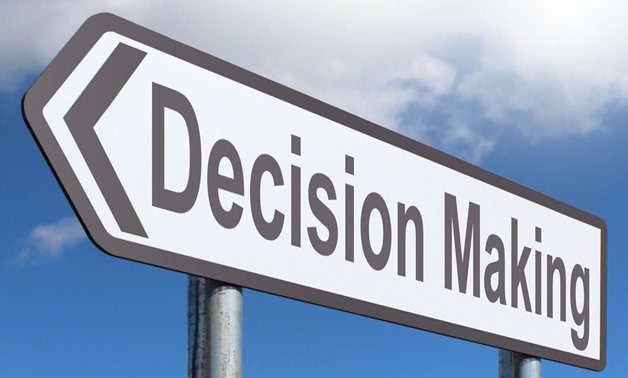 CAIRO – 2 August 2018: Theorising the complex and multi-faceted world of public policy is an infamously difficult prospect. Peter John, the famous political theorist, notes that the policy-making process is so complex and chaotic that there is a clear need to ‘impose some conceptual order’ to understand it. Perhaps the most famous attempt to do so is the policy cycle approach.

Unfortunately, however, policy cycles appear to have more detractors than advocates. These critics, like Michael Hallsworth, dismiss the model as dangerous, naïve, and ‘divorced from reality’. The model’s advocates, on the other hand, acknowledge some criticisms but argue that the policy cycle still represents a useful heuristic device.

Many researchers agree that policy is extremely hard to define. As the Institute of Government (IG) observed in 2011, ‘policies’ can refer to a wide variety of things, including the goals of political leaders, specific actions and legislation, general attitudes and postures, and a structure of practice. Hallsworth defines ‘policy-making’ as ‘the formal expression of activities undertaken by government to achieve outcomes, often through legislation.’.

However, this definition fails to convey the ways in which policy can be achieved by inaction.

The complex nature of policies and policymaking has led scholars to accept the policy cycle model as the most suitable approach to understanding the public-policy process. The policy cycle does not attempt to explain why policy decisions are made but rather how they are made. Originally set out by Harold D. Lasswell in 1956, the policy cycle divides the policy-making process into a series of stages, commencing at a notional beginning, where policy-makers begin to consider a problem, before eventually coming to a notional end, where the policy is implemented.

Over time, the policy cycle has become less linear and more circular, as policy-makers tend to make changed in the policies during the process to ensure that it works to the best possible level and that it is effective and efficient.


Many scholars have worked on the idea of the policy cycle, notably Jenkins—in 1978 particularly; however, Cairney provides perhaps the clearest representation of the model.

Cairney specifies the following stages: first, agenda setting, where a specific problem becomes the area of focus; second, policy formulation, where policy-makers weigh up how to address the problem; third, legitimation, where a policy is decided and enacted; fourth, policy implementation; fifth, evaluation of the policy’s success; finally, policy maintenance, succession or termination.

Many analysts note the intuitive appeal of the policy cycle. There is a clear sense that this is how the policy-making process should work in a democracy: a problem becomes known, policy-makers analyse it, an appropriate policy is crafted and legitimised, and the policy is implemented (Jann and Wegrich, 2007:44). The Clean Air Act of 1956 is one such instance of the policy cycle in action (John, 2012:18). A large fog in London caused public concern; a lobbying campaign made policy-makers aware of the problem; policy options were considered and agreed; the policy was enacted in legislation; finally, smoke control was successfully implemented in London. The outcome was much clearer air in the capital and thus a successfully resolved problem. The Clean Air Act therefore offers evidence that the policy cycle is not only a laudable ideal but also achievable in practice.

The policy cycle holds appeal in other ways. First, it compels analysts to examine how the political system responds to policy problems, a clear area of democratic concern (John, 2012:18). Second, the modern portrayal of the policy cycle as circular rather than linear allows the experience of previous policies to inform new ones and identifies that few policies are completely new (Hallsworth et al., 2011:38). Third, by setting out an ideal process, the policy cycle offers policy-makers a template to survive external pressures by sticking as close to the stages as possible (Hallsworth et al., 2011:38). The policy cycle seems to be both an accurate description of policy-making, at least some of the time, and a useful prescription the rest of the time.

For its critics, the gap between the theory of the policy cycle and the reality of day-to-day policy-making is simply too great. Nearly every policymaker dismisses the cycle as unrealistic. The Cabinet Office, similarly, dismissed the concept in its advice to civil servants, explaining that policy-making is not as neat as the model suggests. Specifically, there are three problems with the model.

First, the policy cycle portrays each stage in linear sequence with a beginning, middle and end when the reality is that the stages “actually consist of a series of reversals and repetition”, according to Hallsworth’s research. In fact, critics argue that the policy cycle’s portrayal of distinct stages is unrealistic and inaccurate. Paul A. Sabatier, for instance, contends that each stage is intrinsically linked to the other stages. The IG’s interviews with policy-makers spell this out: interviewees report that the policymaking ‘stages’ overlap and often merge together. These ‘stages’ merge together as a result of many things, for example moral panics and the media.

A Moral panic is best understood as the process of arousing public concern over a matter that affects society’s wellbeing, usually through mass media. Moral panics pressure policymakers into skipping stages and implementing policies quickly. For example, the 1996 Dog Control Act, which followed the moral panic that spread after several dogs attacked children in public spaces. This suggests that the policy-cycle approach misses the humane side of policy-making; it looks at policymakers as machines and ignores the feelings of, both, the policymakers and the public. Moreover, mass media often plays a big part in agenda-setting and bringing issues to the attention of policymakers. However, the role of the media does not just stop there, it is capable of taking issues off the agenda at anytime, and prioritising other issues, mostly by utilising people’s social values and emotions; thus, not only does the policy-cycle approach dismiss the role of the media at the beginning of the cycle, it also dismisses it throughout the whole cycle.

Second, critics, like Sabatier, allege that the model is too top down and ignores the influence of other actors. In practice, policy is often made by street-level bureaucrats, such as teachers and policemen, who use their discretion when implementing policies in an attempt to advance their personal agenda, according to political researcher Lipsky. This means that those who implement the policies often make decisions that alter their design and aim, as Hallsworth explains. This creates an ‘implementation gap’ between the policy-makers’ expectations and the actual outcome.

Third, the policy cycle model fails to distinguish between different policy areas. In the UK, for example, some policy – agriculture, for instance - is much more ‘Europeanised’ by European Union membership than other areas. Thus, by trying to push all the policy types into the few stages available in the policy-cycle approach, the approach overlooks the unique processes that policies from different sections go through.

There are numerous empirical examples of how the policy cycle appears divorced from reality in practice. One example is the 10p tax reform announced by Gordon Brown with seemingly no preparation whatsoever in 2007, a clear example of unplanned policy-making on the hoof. More recently, the disastrous ‘pasty tax’ of 2012, when Chancellor George Osborne attempted to introduce an ‘unenforceable’ VAT reform on hot savoury food, was abandoned after a subsequent outcry, accorind to the BBC’s 2012 coverage of the issue.

Moreover, according to Damian McBride, a former civil servant, the mess occurred because ministers “didn’t check the proposals out thoroughly enough.” This illustrates how cack-handed policy can be formulated in a seemingly random way to address an apparently non-existent problem. Indeed, for every textbook example such as the Clean Air Act, there are arguably several policies that more closely resemble the pasty tax.

The policy cycle’s advocates, however, insist that we should not be too quick to dismiss the cycle approach. Cairney, for instance, argues that a model need not be accurate to be useful. In this sense, the policymaking process helps our understanding by breaking a complex process into clear stages.

Indeed, it is absurd to expect a model to explain every facet of something as complex as policy-making. In addition, without the policy cycle, it would be difficult to know where to start, and so we should not dismiss the policy cycle entirely, as Dorey explains.