Saudi King slams Al-Qaeda, IS and Iran for promoting terrorism 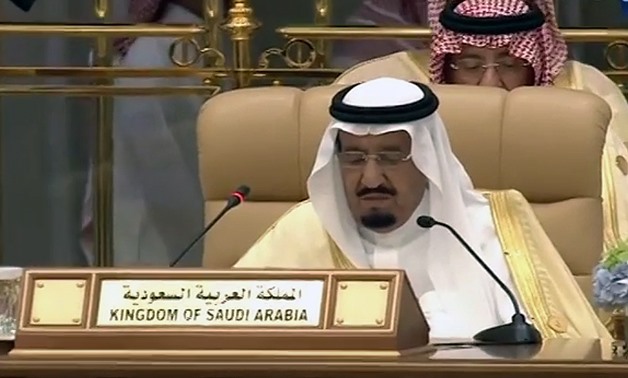 CAIRO - 21 May 2017: Saudi King Salman bin Abdelaziz started his speech at the Arab Islamic Summit by welcoming American President Donald Trump to the Kingdom of Saudi Arabia and the “historic unprecedented summit taking place at a time of unprecedented turmoil.” He emphasized that the U.S. is an important partner in fighting terrorism.

“We are gathered here to take vigorous steps … we stand together against the forces of evil; and this is what Islam ordered us to do.”

Saudi king referred to the Iranian Revolution as the spearhead of terrorism. “The Iranian regime is spreading sectarianism, in collaboration with other allied groups,” the king stated, adding that “Al-Qaeda, Daesh [Islamic State group] and Iran” promote terrorism.

Affirming that Islam is a religion of compassion and peace, the Saudi King emphasized the efforts to combat terrorism. He referred to a “historic agreement with America,” made earlier Sunday, to establish the “international institute to confront radical thoughts.”

“We affirm our determination to eliminate Daesh and other terrorist organizations,” the Saudi King said.

The Saudi king also referred to the Palestinian cause, stating that it constitutes a “fair and essential” demand.