New addiction rehab centers to be established per protocol

By: Egypt Today staff
CAIRO - 18 May 2018: The ministries of military production and social solidarity signed a protocol on Friday to cooperate in establishing new rehabilitation centers to treat addiction and drug abuse.

Minister of Military Production Mohamed El Assar said that per the protocol, the Military Production Company for Projects will prepare the engineering drawings of the rehabilitation centers, as well as carrying out the implementation and supervision tasks of the project.

According to a statement by the Ministry of Solidarity, Assar stressed the necessity of the concerted efforts of all executive bodies, state institutions and civil society organizations to combat the phenomenon of addiction and drug abuse.

For her part, Minister of Solidarity Ghada Wali cited an increase in the number of beneficiaries of the anti-addiction hotline, which requires the provision of a large number of rehabilitation centers at the time the government is implementing a national plan to combat drug abuse.

Wali added that the Fund for Drug Control and Treatment of Addiction (FDCTA), which works under the ministry’s umbrella, executed a number of programs and activities to provide treatment services for patients with addiction in accordance with international standards.

She further said that the protocol comes within the government’s initiative for the cooperation and integration of state institutions and services for the sake of the Egyptian citizenry.

MP Khaled Abdel Aziz, deputy of the Parliament’s Housing Committee, called for carrying out drug tests on students in schools and universities, following a study on drug abuse among students published by the Health Ministry on April 11.

In a study conducted by the Health Ministry on a sample of more than 10, 000 students, it was found that over 24 percent of students had tried drugs, according to Mona Abdel Maksoud, head of the General Secretariat of Mental Health.

Over the course of the last three years, the Fund for Drug Control and Treatment of Addiction (FDCTA), a subsidiary of the Egyptian Ministry of Social Solidarity, executed random drug testing campaigns on school bus drivers.

The campaigns aimed to test 4,000 school bus drivers during the 2016/2017 school year. About 105 drivers reportedly tested positive for drugs.

Article 76 of Traffic Law No. 121 of 2008 states that any highway driver that tests positive in a random drug test will have their license withdrawn for a period of no more than two years.

‘Say No To Drugs Campaign’

Egyptian Liverpool footballer Mohamed Salah participated in the "Say No to Drugs" campaign, adopted by the Ministry of Social Solidarity and the FDCTA, to encourage Egyptian youth to stay away from all kinds of drugs.


In 2016, youth-beloved actor Mohamed Ramadan participated in a campaign sponsored by the ministry. In the advertisement, Ramadan reviews the future of a person, reportedly his friend, who could not resist drugs, and how drugs stopped him from achieving his dreams. Ramadan was honored by Wali for his anti-drugs efforts.


In September 2017, Wali signed a cooperation protocol with Makram Mohamed Ahmed, head of Egypt's Supreme Council for Media Regulation, to counter the misuse of substance abuse and addiction in the media.

Protocol on resolving financial issues between ministries to be signed soon: Gov't 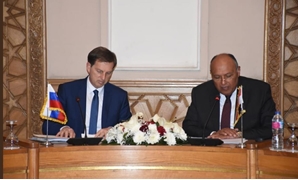