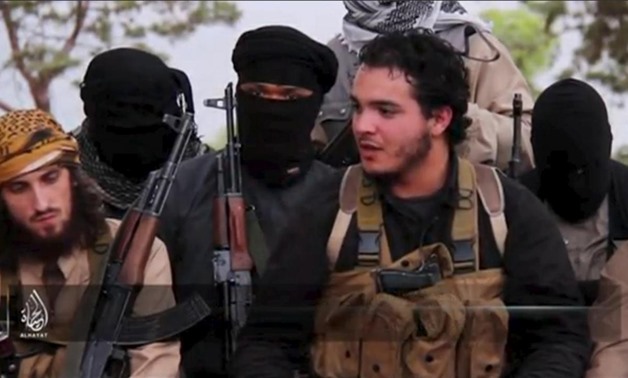 An Islamic State militant who identifies himself as Abu Salman (2nd R) speaks at an undisclosed location, in this still image taken from undated video distributed by Islamic State on November 14, 2015. REUTERS/Social Media Website via Reuters TV

CAIRO – 11 April 2018: Anti-terrorist Comprehensive Operation – Sinai 2018 revealed a fundamental implication that comes from terrorists recruiting escaped convicts, as some of these were arrested by the Law Enforcement Forces during the operation. This raises a question about the unorthodox courses of action taken by terrorist organizations in recruiting new individuals who are invisible to anti-terrorist apparatuses, especially with the recession of ideological and organizational standards as defining factors of the terrorist-making process.

Recruitment is of supreme importance for terrorist organizations because it ensures their survival, and therefore they have often made strict regulations for the recruiting process, demanding ideological and organizational compliance if an individual is to be a member – the strategy which is known as the ‘selection policy’. However, as organizations grew a desire to recruit as many individuals as possible in a hostile and pressuring atmosphere, they started to overlook the selection policy and instead adopted what is known as ‘collection policy’, which necessitates collecting and recruiting as many individuals as possible regardless of their ideological background, which had always been the fundamental factor for joining any terrorist organization. This does not mean that the new members do not hold extremist beliefs, though.

The most important sources of recruitment for terrorists can be defined as follows:

Children: terrorist organizations have lately expanded and have started recruiting children, especially the Islamic State (IS) which largely depends on them now, especially in its areas of power in Iraq and Syria. They are called ‘cubs of the Caliphate’, and those in the ages between 6 and 12 are trained in special camps to be violent and are trained to kill.

Furthermore, the organization created what is known as ‘schools of the cubs’, announced in May 2017, which aim at creating a new IS generation by selecting children and indoctrinating them with a condensed form of the ISIS ideology so as to ensure the survival of this ideology for as long as possible through these children, especially if the organization falls apart.

As for Al-Qaeda, some of its subsidiaries have been notably expanding in the recruitment of children, especially Al-Shabaab militant group of Somalia who was reported by many in the beginnings of 2018 to be exercising the compulsory recruitment of children in its areas of power and using them in acts of violence and killing, the matter which drove many children to leave their homes in order to escape such fate. Terrorist organizations’ persistence in recruiting children comes from the fact that children are much more easily recruited than adults, and can be conveniently used in many terrorist activities such as smuggling and surveillance, not to mention militant and suicidal activities.

Underage girls: Nigerian Boko Haram group is the biggest recruiter of young women, especially underage girls, among terrorist organizations, especially after it has sworn allegiance to ISIS in March 2015. They are increasingly used in suicidal operations, and have become one of the terrorist group’s most belligerent weapons not just in Nigeria, but also in its neighboring countries. The group started using girls in such attacks starting June 2014, and since then the group has been expanding its use of girls until today; the Feb. 17 attack, which was executed by three girls in a fish market in north-east Nigeria and which resulted in 18 deaths and 22 injured people, is just an example.

This issue is a very worrisome one for the Nigerian government, to the point that girls approaching police or army security checkpoints is now regarded as a direct threat, the matter which led to the death of many women and underage girls because authorities mistakenly thought they carried explosives and hence opened fire at them. Women and underage girls are seen by terrorist organizations as a cheap human resource owing to how easily they can be recruited and exploited in many activities such as the smuggling of arms and the transportation of money, messages and assignments, all besides terrorist operations. The convenience comes from their capability of moving around without too many restrictions because of social rules which forbid frisking women or hunting them.

Criminals: terrorist organizations have lately gone to great lengths in recruiting criminals who had practiced robbery, murder or drug dealing, and the most prominent example of this is Abu Musab al-Zarqawi, the godfather of IS who had an especially thick criminal record before he joined Al-Qaeda. By time, terrorist organizations have expanded in recruiting criminals, especially IS, for their cruelty, violence, and organizational skills.

One of the most notable examples here is the cell which performed the Paris attacks of November 2015, for Salah Abdul-Salam, one of the most significant of those involved in the attacks and who was arrested along with his friend Abdul-Hamid Aba’oud. The masterminds of these attacks had been charged with robbery and drug dealing before they joined IS; even his elder brother, Ibrahim Abdul-Salam, who was one of the suicide bombers who performed the attacks, had earlier been in prison for three months in 2015 in Belgium for robbery.

In addition, suicide bomber Omar Ismail Mustafawy who was killed in the attacks and who was one of the earliest names to be disclosed by the French authorities, had a huge criminal record in the French police. The importance of criminals for terrorist organizations is that they have a great nerve for committing violence in comparison with other traditional members owing to their previous criminal experience, and that’s why you often see them taking over operations which require a great deal of planning, observation and swiftness of action.

Mercenaries: some terrorist organizations, especially the ones in Libya, have lately been seeking to attract mercenaries and recruit them, especially those from Chad, Niger, Mali and Sudanese Darfur, so as to exploit their militant and organizational experience in addition to their ability to survive in harsh environmental and climatic conditions.

They are also being sought for their ruthlessness, belligerence, and their ability to perform bloody operations, besides the fact that their allegiance always goes to whomever pays more regardless of their ideas, tendencies or objectives, the matter which drove terrorist organizations to race for their recruitment. They have since become highly widespread in Libya, and perhaps this is why Fayez al-Sarraj, chairman of the Presidential Council of Libya, made a statement on Feb. 10 stressing the necessity of purging the country from these elements for the security and stability of the region and its citizens, and warning that he will not allow the presence of those elements in his country. Likewise, in a press release on Oct. 6, 2017, head of Chad’s security apparatus Ahmed Qukery warned against the threat of the presence of Chadian and Sudanese mercenary groups in the south of Libya and their fighting alongside various Libyan parties on demand.

Sectarian elements: the anxiety that citizens in regions teeming with sectarian strife feel often drives them to join terrorist organizations, or at least support them so as to fall under the protection of these organizations when sectarian violence hits hard. Such is the case in Iraq and Syria where IS was intent on attracting these elements after the sectarian acts of violence that public mobilization militias have organized in the regions they liberated from the grip of IS. Consequently, the sectarian factor contributed yet another human resource to terrorist groups, especially since many of the region’s conflicts assumed an overtly sectarian character.

Terrorist groups’ expansion in recruiting unconventional elements is mainly attributed to their need for such elements in the current phase, either to compensate for the shortage in the numbers of their fighters and to spare the lives of their primary fighters, or to overcome obstacles which get in the way of their terrorist activity.

Therefore, it seems likely that terrorist organizations will continue to recruit such elements as long as they continue to practice their terrorist activities, the matter that necessitates that countries of the region devise clear strategies to thwart the invisible sources of recruitment which have become a significant human resource for terrorist organizations, and to do this before its threat becomes too great to contain or control.