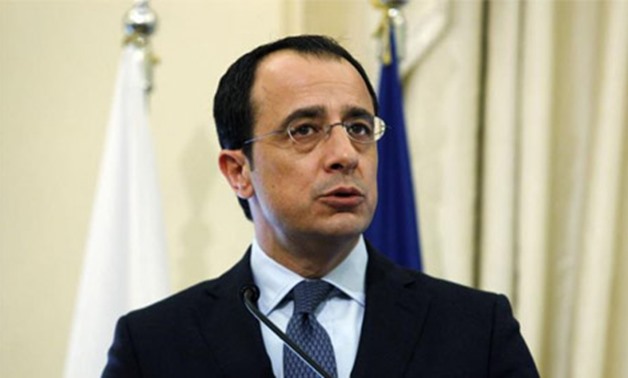 In a press conference at Tahrir Palace in Cairo, Shoukry expressed Egypt’s keenness to continue working with Cyprus and other partners in the European Union on achieving mutual interests, based on principles of mutual respect and non intervention in the domestic affairs of others.

The two ministers discussed the situation in Syria, besides the Palestinian issue, and continuous efforts exerted to establish the sovereign state of Palestine on the 1967 borders with East Jerusalem as its capital, Shoukri said.

Christodoulides praised the “excellent relations” between the two countries at all levels. He said that the meeting discussed ways to fund bilateral agreements, support mutual cooperation in trade, energy and other fields.

During the conference, Christodoulides expressed Cyprus’s respect to Egypt in terms of the solutions the latter issued concerning the Palestinian issue, cyber warfare, and its war against terrorism.

Shoukry had met with Christodoulides during a conference to support the United Nations Relief and Works Agency for Palestine Refugees in the Near East (UNRWA) that was held in March 2017 in Rome.

On the sidelines of the conference, Shoukry voiced Egypt's appreciation for the Cypriot stances in support of Cairo, stressing Egypt's keenness on developing cooperation with Cyprus in the natural gas domain, Foreign Ministry spokesman Ahmed Abu Zeid said.

Shoukry also pointed out the importance of finalizing needed measures related to the governmental agreement on constructing gas pipelines between both countries. In return, the Cypriot minister affirmed that his country is working on this file in line with the set timetable.

On November 20, President Abdel Fatah al Sisi visited Cyprus, and discussed the construction of a pipeline to deliver gas to Egypt from Cyprus’s Aphrodite field.

On April 2, Cypriot President Nicos Anastasiades congratulated President Sisi in a telephone call on his reelection for a second term, wishing Egyptians everlasting progress and prosperity.