When is a good time for fans to return to stadiums? 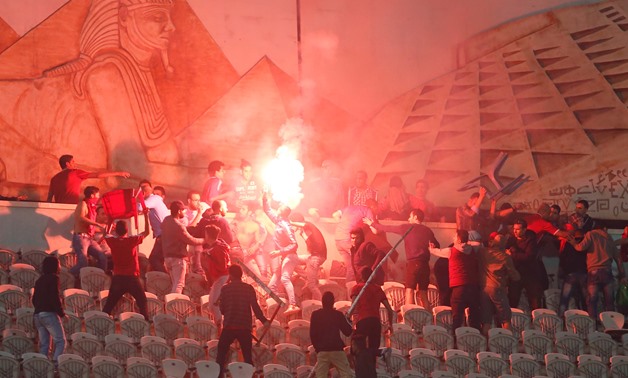 CAIRO – 8 March 2018: The return of unlimited stadium access for fans across Egypt is being discussed with concern as it is rendered problematic after violence erupted at the Cairo Stadium this week.

A number of attendees of Al-Ahly and Gabon's CF Mounana match in the African Champions League match on Tuesday raised their chairs in the air and lit flares, causing a state of chaos although the game ended with Al-Ahly winning 4-0.

Al-Ahly’s fan base, Ultras Ahlawy, was accused given other occasions where a number of the group’s members were convicted of rioting.

Video of Al-Ahly scoring against Mounana

The huge losses at the Cairo Stadium, where the match was held, are estimated at L.E. 650,000 ($36,913) and have raised demands by sports figures and officials to allow audience in stadiums, and not to paint all fans with a broad brush.

On its Facebook page, Ultras Ahlawy denied claims they were involved in the incidents, describing accusations drawn against their members as “illogical” and the rioters as “irresponsible.”

In the same post, the group apologized for the damages and chaos that erupted as part of their responsibility supporting Al-Ahly SC.

Ultras fans have been associated with a cycle of violence since the outbreak of the January 25 Revolution in 2011. Members of both the Ultras White Knights and Ultras Ahlawy were handed prison sentences over charges of enticing violence and protesting against security forces. They were also engaged in clashes with the police.

In October 2017, a military court sentenced three members of the Zamalek football fan club to 10 years in prison and acquitted four others held over charges of illegally protesting in 2013.

According to Ali Darwish, head of the Cairo Stadium, more than 500 chairs and five surveillance cameras were destroyed at the match on Tuesday.


“The audience entered the stadium…they were singing as Al-Ahly won the match but suddenly insults were heard and riots broke out,” Darwish noted in his accounts of the incident on televised statement.

Darwish commented that such violent acts will cause security authorities to postpone a decision permitting audiences to once again attend domestic matches. The decision to limit audience attendance at certain matches went into effect in 2015 following the death of 28 football fans during the 30 June Stadium stampede in a league match between Zamalek and ENPPI.

“I will never retract my demand to re-allow audiences to attend matches, as we will never tolerate such violence,” the head of Cairo Stadium concluded his statements.
The incidents had their echo in parliament as well, with calls for punishment to perpetrators of damages surfacing.


“What a number of Al-Ahly fans did is considered violation to the law, [they] spotted by surveillance cameras to have been involved in the riots,” Member of Parliament (MP) Samir el-Bateekhy said in local media statements Thursday.

El-Bateekhy added the penalty for such acts should be implemented as they are stipulated in the sports law ratified by President Abdel Fatah al-Sisi last June.

In his opinion, MP El-Bateekhy said that such violent acts “are meant to send an inaccurate message to the world that Egypt is unstable, which we will never accept.”

The prosecution launched a probe into the game incidents, and summoned on Thursday Executive Director of the Football Federation Tharwat Sweilam, to give his accounts on the matter.

On the other hand, Al-Ahly SC will also pay for the riots. A total fine of $20,000 will be imposed on the club by the African Football Confederation (CAF), according to CAF official Hamada Shady.

Al-Ahly issued a statement denouncing the incidents, and called on its fans to uphold values and ethics of sportsmanship.

A ban was imposed on fans attending matches since the deadly clashes that took place in February 2012, which killed dozens of fans in Port Said. Later demands to overturn the decision were only met on a limited scope.

Fans are banned from domestic matches, but permitted to Egyptian teams’ games at African competitions and national team games at the World Cup and African Cup of nations’ qualifiers.

With the recent incidents erupted at Cairo Stadium, there is a sentiment that the anticipated decision would be delayed.

Former Zamalek Coach Ahmed Hossam, known as “Mido,” wrote a series of tweets condemning the incidents and reiterating demands to “open the [stadium] doors for fans with no restrictions as of the next season…any decision but that is a victory for saboteurs.”