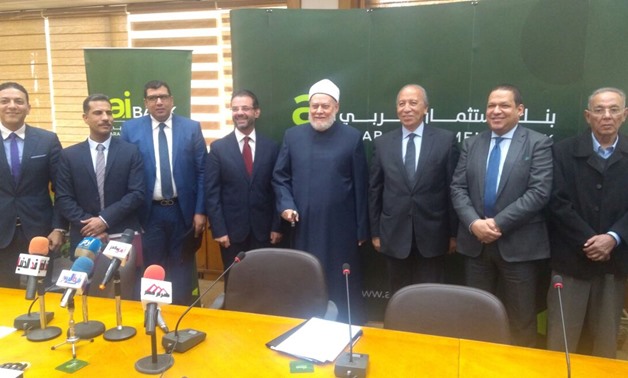 The Misr El Kheir Foundation's Chairman of the Board of Trustees Ali Gomaa signed a cooperation protocol with the Arab Investment Bank, January 4, 2018- Press Photo

By: Marina Gamil
CAIRO – 4 February 2018: On Sunday, the Misr El Kheir Foundation's Chairman of the Board of Trustees Ali Gomaa signed a cooperation protocol with the Arab Investment Bank Foundation for Community Development to solve debtors’ financial difficulties for a year.

This is the second year running that the Misr El Kheir Foundation and the Arab Investment Bank Foundation for Community Development have signed the cooperation protocol.

Gomaa said that the debtors' program aims to take all the legal measures to help debtors to get out of jail, integrate them in a society and provide them with an income, stating that the foundation seeks to take all social and economic measures to protect them from going to prison.

He further explained that the cooperation between the Misr El Kheir Foundation and the Arab Investment Bank Foundation will provide a humanitarian support and aims to reconstruct society for the good of the people, stressing that the foundation until now has succeeded in resolving financial difficulties of 50,000 debtors.

The foundation also exerts efforts to empty Egyptian prisons of debtors and face problems of illiteracy, poverty and disease in the Egyptian community in cooperation with its sponsors that include individuals, banks and companies.

In this regard, the Chairman and Executive Managing Director of the Arab Investment Bank Mohammad Hani Seif el-Nasr said that the protocol aims to solve debtors’ problems for the second year running.

El-Nasr added that the bank cares for charity and aims to open new fields for small enterprises to alleviate the burdens of those who failed to pay off their debts as well as establishing profitable projects for the debtors who have been released from prisons.

As a part of the Misr El Kheir Foundation’s efforts to help debtors, the foundation signed a cooperation protocol with National Bank of Egypt in 2014.

It also signed a cooperation protocol with Ministry of Investment and International Cooperation in December 2017, within the framework of the foundation’s efforts to develop villages in lagging regions. MB will even deal with devil for power: Gomaa Why do Muslims celebrate Mawlid al-Nabawi?