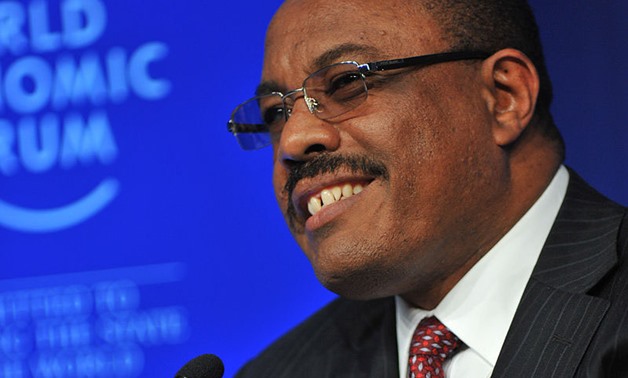 CAIRO – 15 January 2018: Amid ongoing disagreement between Cairo and Addis Ababa over the Ethiopian Grand Renaissance Dam (EGRD), Ethiopian Prime Minister Hailemariam Desalegn will arrive in Cairo on Wednesday accompanied by a high-profile delegation to attend the sixth meeting of the joint Egyptian-Ethiopian Higher Committee. The last meeting was held three years ago and tackled several fields, including education, health, agriculture and fisheries.

Desalegn is expected to meet with President Abdel Fatah al-Sisi and deliver a speech before the House of Representatives. The Ethiopian delegation will include Foreign Minister Workneh Gebeyehu and Ethiopian Ambassador to Cairo Taye Atske-Selassie.

The Renaissance Dam issue will be on top of the discussions between Sisi and the Ethiopian prime minister. The prime minister is expected to state his country’s stance regarding the proposal Egypt made in December to have the World Bank act as a neutral mediator in the tripartite talks concerning the technical studies of Ethiopia’s grand dam.

Arrangements before the meeting


According to sources, there are ongoing talks between the Egyptian and Ethiopian sides to find a solution to the dispute over GERD's technical studies before the upcoming visit of the Ethiopian Prime Minister to Cairo.

The sources pointed out that the joint committee's next meeting in Cairo will focus on cooperation in regional, continental and international issues, in addition to signing a number of agreements in the field of industry and minerals.


The sources said that a series of bilateral meetings between the concerned ministers in the GERD issue from both countries will be held on Wednesday at the headquarters of Egyptian Cabinet.

The ministers will put the joint committee meeting's agenda and arrange cooperation procedures. Afterwards, the Ethiopian Prime Minister will meet a number of Egyptian ministers before holding the bilateral summit in presence with President Abdel Fatah al-Sisi on Thursday.


On the other hand, the Ethiopian Foreign Minister Workneh Gebeyehu visited Sudan on Sunday to deliver a written message from Desalegn to Sudanese President Omar al-Bashir.

During a press conference in Khartoum, Gebeyehu said that Desalegn's letter is related to the two countries' efforts to boost cooperation in issues of mutual concern in the region.

During the visit, Gebeyehu met his Sudanese counterpart Ibrahim Ghandour and discussed several topics in political and economic fields.


In March 2015, the leaders of Egypt, Sudan and Ethiopia signed the "Declaration of Principles" in a step to put an end to the four-year dispute over Nile water sharing arrangements among Nile Basin countries.


The 17th round of GERD Tripartite National Technical Committee dispersed from a meeting in Cairo in November 2017 without reaching agreement on the "inception report" prepared by two French firms, BRL and Arterlia, on their technical studies of the dam's potential impact on Egypt and Sudan.

Ever since this latest unsuccessful meeting, there has been strong word coming from the Egyptian side.

Egyptian President Abdel-Fatah Al-Sisi said that “Nile is a matter of life or death to Egypt.” A catchword that Sisi repeated at a recent inauguration of a fishery in Egypt.