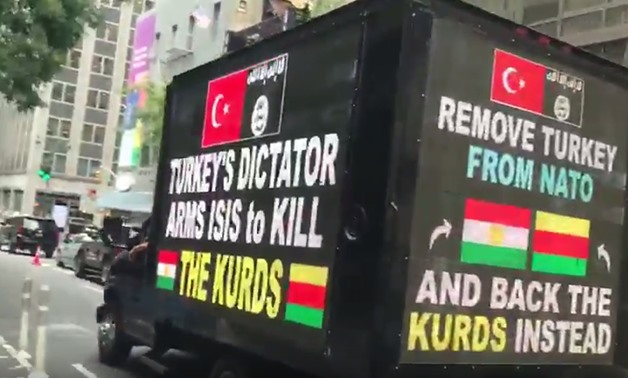 The van that carries supportive slogans to Kurds

CAIRO - 21 September 2017: A truck is roaming the streets of New York City carrying a banner that reads “Remove Turkey from NATO and back the Kurds instead”. The truck was spotted by Egypt Today’s reporters while covering President Sisi's visit to the U.S. The president participated in the 72nd session of the General Assembly of the United Nations.

The Kurdish-Turkish conflict is a conflict between Turkey and a number of Kurdish insurgent groups, which have demanded separation from Turkey to create an independent Kurdistan.

The Kurds are planning to hold a referendum for their independence on September 25; however, the referendum was met by strong rejections from Turkish President Recep Tayyip Erdogan and Iraqi Prime Minister Haider al-Abadi.

According to Reuters, Erdogan is now threatening to impose sanctions against Kurdish northern Iraq in response to the independence vote, in order to place pressure on the group.