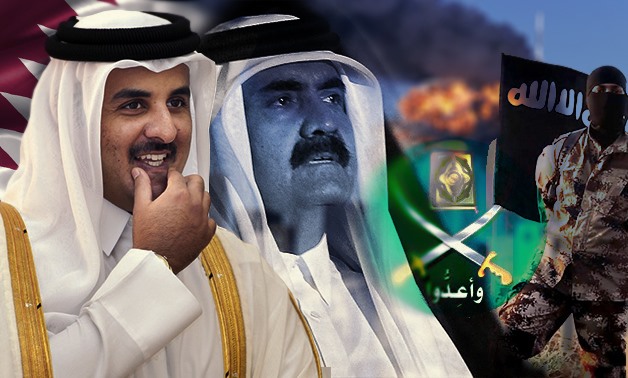 Leaked documents prove that Qatar has failed to comply with written obligations to the GCC. Moreover, Qatar’s counterterrorism efforts have long been criticized by U.S. officials – Egypt Today/Mohamed Zain

CAIRO – 14 September 2017: One hundred days have passed since countries decided to take a step against the tiny emirate of Qatar and its policies that financed and backed terrorism, contributed in destabilizing the region, drove wedges between neighboring countries and spread chaos to achieve its own schemes and agendas.

No end in sight!

But if you think that being a rich country can make you immune to such crisis, well, think again! Qatar might have natural gas or oil, but it does not really produce its own food. Almost 40 percent of its food used to come in through the land border with Saudi Arabia.

This can be seen clearly as during the first days of the boycott against Qatar, supermarket shelves in Doha were emptied as residents hoarded to stock up supplies before Turkey and Iran began sending food shipments.

The Qatari government also did not consider how Qatar Airways would be affected as being one of the biggest airlines in the world; however, it can no longer use Egyptian, Saudi, Bahraini or Emirati airspace, which means that flights to places like Africa or North America would take much longer detours. Qatar’s civil aviation income withdrew 25 percent after the crisis.

As for the Qatari stock market, it lost about 10 percent in market value over the first four weeks of the crisis.

Even though major Arab countries decided to cut ties with the tiny emirate have proposed demands and solutions to the crisis, Doha kept refusing and wriggling; the matter only added insult to injury.

But instead of making things right with its neighbors and admitting what dozens of documents and facts indicate on its relations with terrorist organizations and regional foes like Iran, Qatar denied all charges and portrayed the boycott as an attack on its sovereignty.

On July 5, the ATQ received a negative response to the 13-point list of demands that was presented to Qatar in order for the crisis to be resolved; some of these demands included, severing all ties to terrorist organizations, cutting diplomatic ties with Iran, shutting Al-Jazeera Network and paying reparations and compensations for all the damages and losses resulted by Qatari policies.

The ATQ, still keen to find a common ground, shrunk the list to only six broad principles, namely combating terrorism and extremism, denying financing and safe havens to terrorist groups, stopping incitement to hatred and violence, and refraining from interfering in the internal affairs of other countries, however, Qatar still refused to comply.

Gulf analyst Kristian Ulrichsen, according to

, said the standoff was not likely to end any time soon.

Earlier this month, U.S. President Donald Trump decided to step in and find a deal that could be “worked out very quickly”, however, after only a few days, Qatari-Saudi relations became more complicated.

On September 9, Saudi Arabia suspended all dialogue with Qatar, accusing it of "distorting facts.”

The call intended to defuse a three-month political crisis between Qatar and the Anti-Terrorism Quartet (ATQ).

Qatar News Agency (QNA), on the other hand, decided to lay its touch and reported that Tamim has agreed to send envoys for negotiations upon Saudi demands; Saudi Arabia dismissed what QNA reported shortly.

A Saudi official at the Saudi Foreign Ministry said what was published is far from the truth and that it is deemed a continuation of the fact-misrepresentation practices by the Qatari authority.

He added that this indicates that Qatari authority did not realize the Kingdom of Saudi Arabia would not tolerate how Qatar alters facts.

Yes, Qatar does have strong relations with Iran

on August 31 that no one could claim that Qatar has special relations with or a special policy towards Iran.

Oddly enough, Doha chose to have close relations with Tehran against its GCC and Arab neighbors’ demands, despite already knowing its schemes towards the Arab region; no wonder Tehran leapt at the opportunity to offer food aid and opened its airspace to Doha following the crisis.

“Divided GCC has always been a strategic goal of Iran as it weakens the alliance’s ability to stand up to Tehran and her regional agenda,” Vatanka said according to

Why is the Qatari regime doomed to failure?

Press outlets have been reporting that the move led by the ATQ against terrorism has succeeded in hunting down and exposing some of the entities and individuals that Qatar supported and used in schemes to bring destruction and chaos in several Arab countries, including Syria, Libya and Iraq.

It also unveiled the truth behind Doha supporting the outlawed Muslim Brotherhood and other terror organizations such as IS and al-Qaeda.

The four countries leading the move against Qatar and its policies, according to observers, have managed to build a front consisting of some countries that got affected by the Qatari practices and its support to terrorism in the region.

Shutting off airspace between the countries boycotting Qatar has also helped in blocking supplies from Doha to armed terrorist groups in Syria and Libya, allowing the liberation of some main cities and districts, including Benghazi.

“Regardless of its new-found confidence, Qatar may be forced to blink first,” Christopher Davidson told AFP.

A country with no word

On July 11, leaked documents proved that Qatar has failed to comply with written obligations to the GCC. The agreements from Gulf meetings in 2013 and 2014 further clarify the strong actions taken against Qatar by the ATQ. The documents also state that in case of a failure to work within the agreed framework, the rest of the GCC can take necessary steps to protect its security and stability.

Aside from all the agreements and pledges that Qatar vowed to maintain, the aforementioned documents specify a number of terms that Qatar never fulfilled; for instance, the document dated back to November 2013 stipulated not giving refuge to any individual or group opposing another member state, not interfering in internal affairs of other GCC members and not supporting the Muslim Brotherhood or any organizations, groups or individuals that threaten the security and stability of the Council states.

The 2013 document was hand-written in Arabic after a meeting between the late Saudi ruler, King Abdullah, the Emir of Kuwait, Sheikh Sabah and the Emir of Qatar, Sheikh Tamim.

Qatar also decided to break another commitment that was signed in November 2014, repeatedly failing to meet its obligations.

Soon after striking the agreement, Qatar began continuing what the agreement specifically prohibited; it kept on boosting ties with regional rival Iran, resumed Al-Jazeera network activities in the region, and moreover, it financed and backed terrorist groups and individuals.

Three years later, Qatari Emir Sheikh Tamim Bin Hamad Al-Thani was part of the three summits that took place in Saudi Arabia with the presence of U.S. President Donald Trump. During the summits, Sheikh Tamim signed agreements that promised his country’s commitment to fight terrorism; however, soon after the summits, Tamim was quoted justifying the Qatari-Iranian ties, regardless of Trump saying Iran is the “exporter of terrorism.”

Apparently Qatar has deluded the whole world. As part of the “Sky Documentaries”, Sky News Arabia revealed a documentary film, entitled “Qatar… The Road to Manhattan”. The documentary shows the relations and links between Qatar and the mastermind of the 9/11 attack, namely Khalid Sheikh Mohammad, and how Qatar supported him, gave him shelter and financial assistance, and prevented U.S. intelligence from arresting him.
The documentary also exposes Al-Thani’s sympathy with former leader of al-Qaeda Osama bin Laden.

Enough with the lies

on May 25 quoted Tamim rejecting accusations of supporting terrorism, outlining the emirate’s continuous efforts as part of an international coalition against IS.

The U.S. State Department revealed in its

on terrorism that “entities and individuals within Qatar continue to serve as a source of financial support for terrorist and violent extremist groups, particularly regional al-Qa’ida affiliates such as the Nusrah Front.”

But “three years into Tamim’s new regime, however, its record is still conspicuously incomplete,” revealed a report released by the Foundation for Defense of Democracy (FDD), a non-partisan policy institute.

The report, the second in a three-part series titled “Qatar and Terror Finance - Part II: Private Funders of al-Qaeda in Syria,” tracked Qatar’s support to terrorist organizations, dating back to 2013 and argued that “Hamad bin Khalifa Al-Thani’s reign was characterized by persistent negligence toward local U.S.-designated funders of al-Qaeda . . . some American officials have expressed hope that Emir Tamim would turn over a new leaf in Qatar’s approach to tackling terror finance.”

Qatar’s counterterrorism efforts have long been criticized by U.S. officials; one

sent by U.S. Secretary of State Hillary Clinton in December 2009 noted that, “Qatar’s overall level of counter terrorism cooperation with the U.S. is considered the worst in the region.”

“The remarkable truth is that few in the Middle East would be shocked,” The

reported on September 20, 2014. “From Hamas in the Gaza Strip to radical armed movements in Syria, Qatar’s status as a prime sponsor of violent Islamists, including groups linked to al-Qaeda, is clear to diplomats and experts.”

Jonathan Schanzer, vice president of the Foundation for Defense of Democracies, agrees. In a

article he argues that, “When the George W. Bush administration launched the war on terror, it overlooked Qatar’s track record, including that 9/11 mastermind Khaled Sheikh Mohammed had found shelter on Qatari soil.”

“Neither Bush nor Obama punished the Qataris for terrorism finance. Indeed, Qatar should have been designated as a state sponsor of terrorism by the State Department,” Schanzer added.