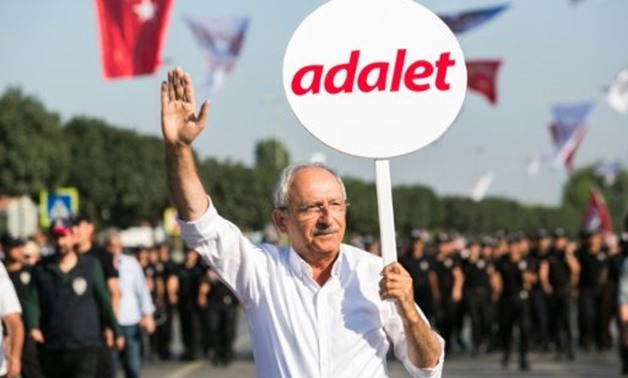 ÇANAKKALE (TURKEY) -26 August 2017: Turkey's main opposition leader on Saturday begins hosting a four day "justice congress" in a bid to keep up the momentum from the success of a month-long foot march protesting against alleged injustices under President Recep Tayyip Erdogan.

Kemal Kilicdaroglu, head of the secular Republican People's Party (CHP), is holding the congress at an open-air site in the northwestern province of Canakkale, with sessions each day focusing on different rights violations in Turkey.

With politics heating up in Turkey even two years before the next elections, Erdogan will on Saturday host a mass rally at the opposite end of the country marking the anniversary of the 1071 Battle of Malazgirt where pre-Ottoman tribes defeated the Byzantines.

The pick of the region for the CHP congress is also significant as it was the site of the World War I Battle of Gallipoli where the Ottoman army successfully repelled Allied forces.

The CHP was founded in 1923 by Mustafa Kemal Ataturk, who was a Turkish commander in the Gallipoli campaign where the heroism of Turkish troops is said to have helped lay the foundation of the modern republic.

Kilicdaroglu earlier this summer walked 450 kilometres (280 miles) from Istanbul to Ankara to protest against the sentencing of one of his MPs, Enis Berberoglu, to 25 years in jail for leaking classified information to an opposition newspaper.

Under the simple slogan "justice", the march culminated last month in a huge rally in Istanbul that attracted hundreds of thousands, the biggest event staged by Erdogan's critics in years.

More than 50,000 people have been arrested under Turkey's state of emergency, imposed after last year's failed coup, and almost three times that number have lost their jobs, including teachers, judges, soldiers and police officers.

The foot march angered Erdogan, although police were praised for ensuring its security rather than impeding its progress.

"The justice march has gone far beyond the ordinary," Kilicdaroglu told the NTV broadcaster late on Wednesday.

"The march received bigger public support than even I expected because this country has a thirst for justice," he said.

Erdogan has darkly hinted that the CHP leader could find himself under investigation, even if other Turkish officials have emphasised that nothing is in the pipeline.

"Don't be surprised if Kilicdaroglu's links to the case of the individual in jail (Berberoglu) are revealed," the Turkish leader said.

Erdogan won an April referendum boosting his powers but Turkey is already in the throes of what appears to be a long election campaign, heading to November 2019 parliamentary and presidential elections.

The Turkish president, who is already signalling he will stand for another term, has urged the ruling Justice and Development Party (AKP) to get in better shape for the election fight.

In a sign of the rancour between the two men, a photo depicting the CHP leader wearing a white undershirt while dining in a trailer during the justice march drew a sharp response from Erdogan.

"Someone has made a so-called justice march, sitting from time to time in a trailer, having dinner wearing a vest ... that's an insult to my citizens," Erdogan said.

The mildly-spoken Kilicdaroglu is sometimes compared by supporters to the Indian independence leader Mahatma Gandhi, and Erdogan took particular offence at a newspaper headline describing him as "citizen Kemal".

The CHP leader responded that the trailer picture just showed "a family from Anatolia" where "I am peacefully eating with my daughter."

"I didn't come from the palace. I am an ordinary, plain, Joe Public ... I say justice, he says vest."