Photos - Projects underway at Egyptian ports vital to back state's plan to up exports: PM 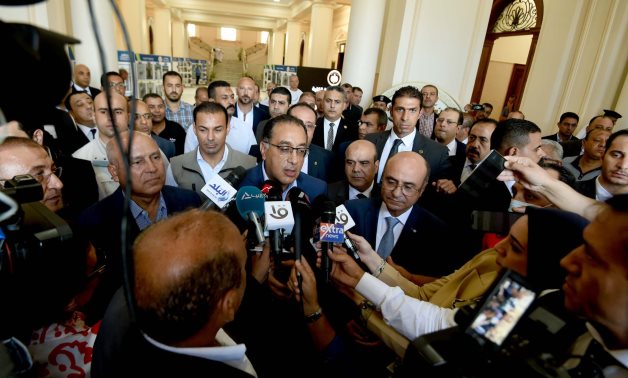 CAIRO – 17 August 2022: Prime Minister Mostafa Madbouli underlined the importance of the projects carried out at the Egyptian ports to back the state's plans to up the exports movement and benefit from Egypt's location as a strategic center for the international trade movement.

The premier's remarks were made during his tour of a number of projects under construction at Alexandria Port. During the tour, Transport Minister Kamel El Wazir said projects which are being implemented are vital for the maritime transport and trade movement, underlining that expanding the length of the maritime services terminal from 100 meters to 160 meters which allow it to receive the new dredgers and transform the maritime services to a specialized arsenal for ships.

Wazir also noted that a number of logistic areas are being established on the lands of Nagaa Iso and Aluminum on areas of 273 feddans and 600 feddans respectively. He said such logistic areas are part of the transport ministry's plan for Alexandria Port and its surrounding area. The port area will be transformed into an international hub for logistics and trade, and should become one of the leading ports in the Mediterranean Sea.

The plan involves connecting cargo distribution centers and logistics areas, including sea and dry ports, with Alexandria Port. After increasing storage areas, the result will be a massive boost to the volume of cargo handled, as well as numerous other value-added activities. Full completion of the development project will be by the year 2024, he added.

The premier also inspected "Tahia Misr" multipurpose station and Hawes el Maleh bridges project, which will allow the passage in both directions of the railway lines in Alexandria and the movement of mega container cargos.