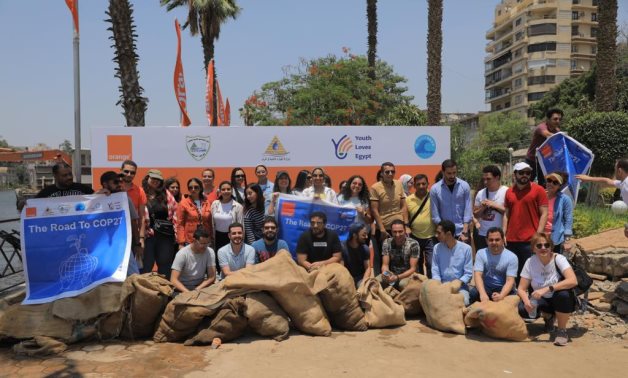 Volunteers of Youth Love Egypt Foundation and Orange who carried out a campaign to clean Nile River banks at Zamalek in June 2022. Press Photo

CAIRO – 21 June 2022: 'Youth Love Egypt' Foundation and Orange joined forces, under the auspices of the Ministry of Irrigation and Water Resources, to implement a campaign for cleaning the Nile River ahead of COP 27. The campaign, which was launched from the headquarters of the Engineers Syndicate Club in Zamalek, was carried out by 50 Orange workers and members of 'Youth Love Egypt.' The cleaning took place at the banks of Zamalek neighborhood, and the distance until Embaba Bridge. The outcome was collecting more than a ton of plastic waste in burlap sacks. The volunteers did the work manually while putting on gloves, and were aided by a water digger donated by the ministry for this particular mission. The event is one of a series of activities scheduled for the time leading up to COP 27 to be hosted by Egypt in Sharm El Sheikh on November 7-18, and that are aimed at raising environmental awareness.

In November, The Youth Love Egypt (YLE) Foundation planted  2,000 trees, under the auspices of the Ministry of Irrigation and Giza Governorate and in cooperation with Thyssenkkrupp to adapt to climate changes.

The afforestation campaign was launched in Dahshur area, near Giza Pyramids, aiming for planting 2,000 olive trees, berries and pomegranate trees on both sides of one of the canals that were lined within the national project for lining canals and drains.

The project comes within the framework of the Foundation's efforts to adapt to climate changes after the Climate Summit in Glasgow.

The research unit of the Youth Love Egypt Foundation carried out a research study on these trees and the impact of their roots on the lining project. This initiative comes within the ‘Nile Tree’ project, which was launched by the Foundation on World Environment Day under the slogan of restoration with the aim of planting half a million trees over two years to adapt to the weather changes.