80% of cultivated area of wheat to be harvested in May: Egyptian Head of Farmers’ Syndicate 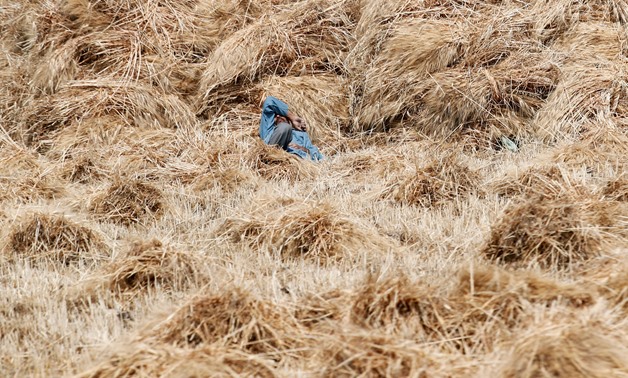 File- A farmer takes a rest inside freshly harvested wheat at a field in Minya governorate, south of Cairo, Egypt May 16, 2018. Picture taken May 16, 2018. REUTERS/Amr Abdallah Dalsh/File Photo

CAIRO – 3 May 2022: Eighty percent of the cultivated area of wheat in Egypt would be harvested in May, said Head of the Egyptian Farmers’ Syndicate Hussein Abdel Rahman Abu Saddam in a statement on Tuesday.

“Most of the cultivated areas of wheat turned ripe so that the quantities of wheat supply have gradually increased to reach the largest rate at the end of this month and the beginning of next month,” he said in the statement.

The cultivated area of wheat this season has reached about 3.6 million acres, with expected productivity of more than 10 million tons, he added.

In early April, Egyptian farmers started to supply the locally-produced wheat to the Ministry of Supply.

Egyptian Prime Minister Mustafa Mabdouli announced on April 4 that Egypt’s wheat stock for domestic consumption is sufficient for 2.6 months, adding that the government has allocated EGP 1.1 billion to the Supply Commodities Authority and the Agricultural Bank of Egypt for purchasing the local wheat from the local farmers.

Egypt’s wheat imports are projected to go down due to the Ukraine-Russian, said the US Foreign Agriculture Service (FAS) of the US Department of Agriculture on March 28, 2022.

“FAS Cairo forecasts Egypt’s wheat imports in MY 2022/23 (July – June) at 11 MMT, down by 8.3 percent from MY 2021/22 Post’s import estimate figure of 12 MMT. Importing and buying wheat from other markets remains a viable option for government and private purchases,” the FAS said in its report.

Egypt is currently suffering from a crisis of wheat supply from the conflicting Russia and Ukraine, the two biggest wheat importers to Egypt. So, the government is targeting to increase the area of the wheat crops by 1.5 million feddans over the next three years in accordance with a new study conducted by the Egyptian Cabinet's Information and Decision Support Center (IDSC).

Despite the government’s efforts to secure the wheat supply that is essential for the subsidized bread, one of the 2011 Revolution’s slogans, the government would not stop importing wheat from other countries like France even with high prices to fill the gap between the local production and the consumption, as it was stated to Egypt Today by Abu Saddam last month.

Three days ago, the Egyptian government announced India as a new wheat supplier. Qusseir announced in a statement on Thursday that India has been recognized as a new country of origin for importing wheat within the framework of the state’s plan to open new sources of importing wheat as a strategic commodity.