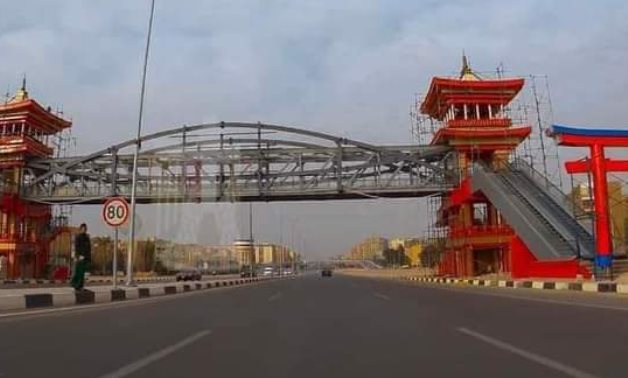 CAIRO - 15 April 2022: Pedestrian bridges on the Shinzo Abe axis, east of Cairo, have been finished in the traditional Japanese architectural style.

The Shinzo Abe axis is an example of the optimal exploitation of resources. The location of the axis had hosted high pressure towers along the center of Al-Amal City, previously known as Ezbet El-Haggana. It saved thousands of families who used to live under high pressure towers, suffering from their harm.

Al-Amal City was transformed from a slum area into a modern district with furnished units handed over to the original residents.

The 8-kilometer axis passes through Al-Amal City for two kilometers. It has a width of 37 meters and connects Nasr City to the Suez Road and the Ring Road. It starts from Mostafa El-Nahas axis in the Free Investment Zone.

It also shortens the distance and time and alleviates traffic pressure on the east of Nasr City.