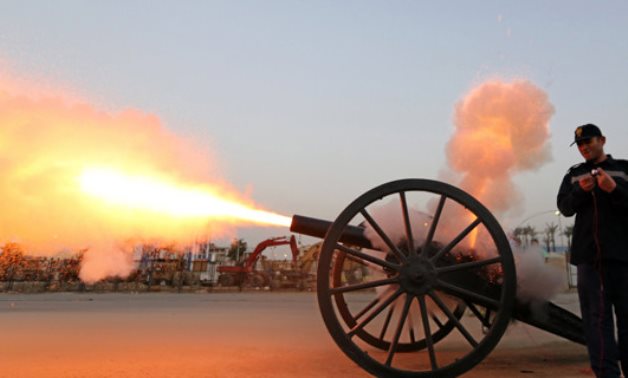 An Egyptian policeman in Cairo fires a cannon to announce the time to break fast during Ramadan. (REUTERS file photo)

CAIRO - 13 April 2022: Worldwide, Muslims receive the holy month of Ramadan with the same great joy; yet their Ramadan traditions differ according to their regional heritage.

In Egypt, celebrating Ramadan has its own special manifestations. Egyptians view this holy month as a haven and an opportunity for contemplation and drawing closer to God.

et monitors in the following lines the most prominent traditions of the holy month.

Many Muslim countries announce the break of fasting during the holy month by firing a cannon at sunset, but Cairo was the first city to adopt the tradition.

In 865 AH, the Mamluk Sultan wanted to test a new cannon. When the cannon was fired at the exact time of sunset, people believed that the Sultan deliberately fired it to alert the fasting people that it was time to break their fast. The crowds then went to thank the Sultan, who subsequently decided to proceed with firing the cannon at breakfast and suhoor.

the “mesaharaty”, or the night caller, who takes upon him the task of walking around the village or city to wake people for suhur, the light meal Muslims take before they begin the dawn-to-dusk fasting.

In small villages, the mesaharaty - also known as 'Al-Tabbeil' (drummer) in other parts of the Arab world - will stop in front of each house and call the inhabitants by their names to wake them up for the meal.

The job of mesaharaty first appeared during the time of Abbasid caliphs. Otbat Bin Ishaq, then governor of Egypt, was the first known mesaharaty in history. He walked through the streets of Cairo to remind people of suhur in the year 238 AH.

For many centuries, Muslims in the Arab world have enjoyed special traditional desserts during the holy month of Ramadan, including Kunafa and qatayef, which are made of a mixture of flour, water, and powdered milk.

Some Islamic historians say kunafa dates back to the Fatimid Caliphate, when Caliph Moezz Li-Dinillah entered Egypt in Ramadan and people welcomed him with this kind of dessert.

Other historians say Kunafa and qatayef date back to the era of the Umayyad Caliphate, where Levantine dessert makers prepared these desserts for Muawiyah I, the founder of the Caliphate, after he complained of hunger during fasting Ramadan.

This is a relatively recent tradition. Ramadan tents are believed to have originated from the Egyptian "saradek," tents set up in Cairo for people to offer their condolences. Saradek then changed over time to be used by organizations and merchants as well.

Saradek became a venue for providing food and shelter to the needy, particularly during the winter months. This marked the beginning of its transition to becoming the aRamadan tent that is well-known today. Soon, the saradek merged with the preexisting traditions of Arab hospitality and lavish Iftar dinners to create the modern Ramadan tent.

Ramadan tents only became popular in the Levant following the end of the Lebanese Civil War in 1990, when they were introduced to Lebanon by a prominent businessman from the Tabbara family.