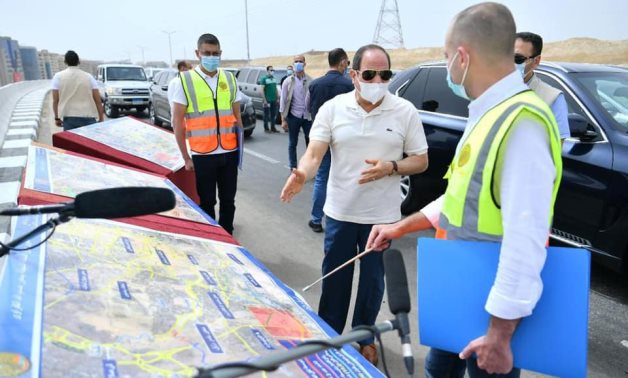 CAIRO – 8 April 2022: President Abdel Fatah al-Sisi inspected Friday the construction works of a number of roads in Greater Cairo, holding conversations with workers and greeting them on the occasion of the Holy Month of Ramadan. The presidency's spokesperson stated that the roads inspected include the one named after Late First Lady Gihane Al Sadat, and that links between Ramses Square in Downtown and the Autostrad Road. He underlined the importance of maintaining technical and construction efficiency of these projects in line with directives of President Abdel Fattah El Sisi.

The Cabinet's Information and Decision Support Center (IDSC) indicated in November that Egypt's investments in the road and bridge sector increased by over 90 percent during the past three years.


In an infographic, the center said Egypt pumped investments worth 79 billion pounds into the housing sector in FY2019/20, constructing 194,200 houses.

Minister of Environment Yasmine Fouad explained in September that the ministry started studying ways to get rid of construction waste amid the implementation of giant projects, where a number of spots were allocated to dump the waste of Greater Cairo; however, this was not sufficient.

“It was necessary to study an integrated system for the disposal of construction waste,” she added.

The minister continued saying that the construction waste were recycled to be reused in construction, whether in paving roads, making tiles and various products.

She said that the ministry was assigned to immediately start this project by purchasing a set of crushers for recycling of construction and demolition waste.