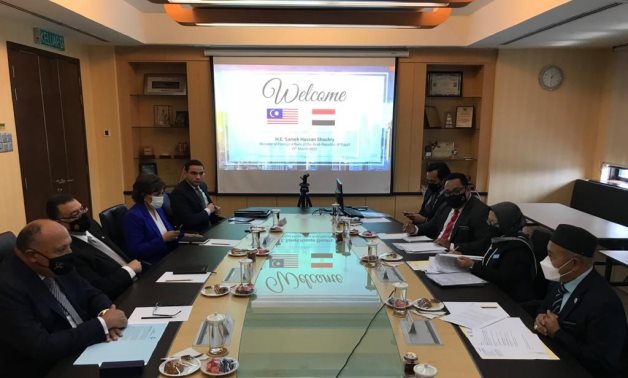 Meeting of Egyptian delegation led by Minister of Foreign Affairs (l), and Malaysian Minister of Environment and Water Tuan Ibrahim Tuan Man among other officials on March 15, 2022. Press Photo

Both ministers exchanged views over the most crucial topics suggested for the agenda of COP27, to be hosted by Egypt in Sharm El Sheikh next November. They also discussed ways of reinforcing coordination on matters pertinent to climate change, its repercussions, climate funding, and reducing emissions in the coming period until COP27.

The minister had also given an overview of Egypt's preparations for COP27 to Malaysian Prime Minister Ismail Sabri bin Yaakob when they met Monday.

Minister Shokry began his Asian tour with Malaysia delivering a message from President Abdel Fatah al-Sisi to the prime minister. The following destinations will be Singapore, Indonesia, and Pakistan.

The minister is scheduled to attend the 48th session of the Organization of Islamic Cooperation (OIC) Council of Foreign Ministers (CFM) to be held in the Pakistani capital Islamabad on March 22-23.