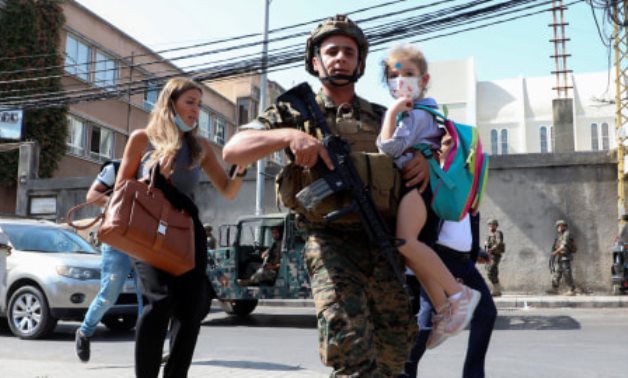 Lebanese soldier carrying a schoolgirl after the shooting - Mohamed Azakir/Reuters

CAIRO – 14 October 2021: Egypt calls on all Lebanese parties to exercise restraint, refrain from violence and strife, and to uphold national interests, spokesperson of the Foreign Ministry said in a Thursday statement.

Spokesperson Ahmed Hafez said Egypt is following with great concern the situation in Lebanon and is saddened by the shooting that took place in Beirut on Thursday morning, where six Shiites protesting the investigation of the blast that shook the city in 2020 were killed.

The statement said the interests of the Lebanese people should be the priority in a framework of adherence to the constitution and the law to ultimately stabilize and secure the country and remove it from the vicious cycle of crises.

The government and state institution should assume their responsibilities in managing the country, resolving the crisis, and restoring stability so the international community could help Lebanon move towards a better future, the statement added.