V4 to advocate Egypt at EU, call for release of aid, border protection technology to Cairo as it counters illegal migration 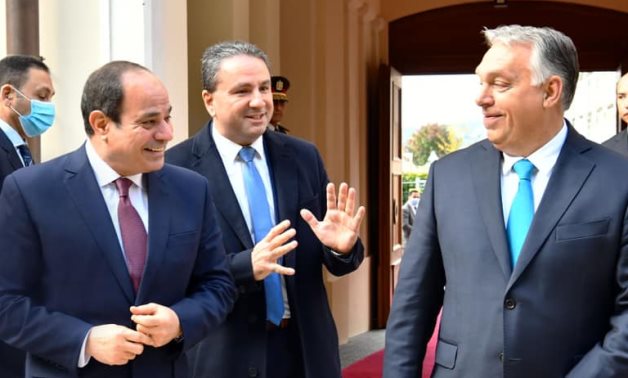 CAIRO – 13 October 2021: The Visegrád Group (V4) leaders have shown immense support for Egypt, adopting all of President Abdel Fattah el-Sisi’s proposals and vowing to persuade the European Union to do the same.

Hungarian Prime Minister Viktor Orbán, who said Sisi’s visit to the V4 was an honor and that “ties are friendly and brotherly,” described illegal migration today as “much worse” than in 2015, hence “strengthening Egypt is an “existential issue for the EU,” according to Hungary Today.

Slovak Prime Minister Eduard Heger linked Egypt’s security and stability to those of Central and Eastern Europe, saying V4-Egypt confirms that Egypt remains one the most important partners in the Middle East, with an unmistakable influence to address many of the region's political and security challenges, such as terrorism and illegal migration, where Egypt plays an important role, Slovak news website Teraz.sk reported.

“We are besieged,” Orbán said, adding that “if Egypt could not continue the policy of preventing the flow of migration towards Europe, then we will all be in a very big trouble," Hungary Today quoted Orbán as saying.

For his part, Morawiecki praised Egypt’s efforts that resulted in detecting no migration vessels coming out of Egypt since 2016.

Poland’s Morawiecki said the V4 countries would try to convince Brussels that economic cooperation with Egypt was important.

“Brussels should also focus more on economic cooperation with other countries, as the Visegrad Group is doing now under the leadership of Hungary and Viktor Orbán, because this is an export of hope,” Slovak new website Teraz.sk reported the Polish prime minister as saying.

Hungary announced it has already taken steps in the direction of economic support for Egypt, as Orbán said Eximbank, the country’s official export-import bank, has opened a separate chapter to ensure that “Hungary not only exports goods but sets up factories in Egypt.”

Such businesses could offer jobs to local youth, while Hungary could also contribute to European efforts aimed at stabilizing the Egyptian economy in the long run, Orbán added.

Meanwhile, Slovakia’s Heger thanked Sisi for inviting businesses from the V4 to expand their operations in Egypt, saying "we are ready to work with Egypt on a range of topics such as security, economic development, and also tourism," said Heger, Teraz.sk quoted him as saying.

"The Slovak Republic welcomes and supports the further development of a comprehensive political dialogue with Egypt, which has been deepened today, as well as Egypt's cooperation with the European Union," Heger added.

Orbán, the Hungarian prime minister, called on the EU to convene the EU-Egypt Association Council as soon as possible, accept Egypt as a strategic partner, and to endorse its proposals to combat terrorism.

He proposed that the EU adopt Egypt's list of terrorists and terrorist organizations and recommended lifting the European restrictions that prevent Egypt from buying equipment for border protection, according to Hungary today.

“Egypt not only needs its border controls reinforced, but the country’s economy should also be stabilized so that local youth are offered opportunities of a good life,” Orbán said, adding that this is also in Europe’s interest.

Various drones and surveillance technologies would be required to securely control these borders and Hungary will therefore initiate that the EU withdraws the restrictions and enables the acquisition of technologies required for successful border protection by Egypt, Hungary Today quoted the Foreign Minister as saying.

Szijjártó told reporters after the summit that the EU was withholding the EUR 120 million in aid that would go to Egypt under the European Neighborhood Policy but had not yet transferred this amount for "all kinds of false and artificial political reasons," Hungarian news website Magyar Nemzet reported.

He urged the European Commission to transfer the amount due to Egypt as soon as possible and to “stop linking this financial assistance to all false and artificial political preconditions,” the foreign minister said.

In December 2020, the European Parliament voted for a resolution that called on the EU member states to "establish clear benchmarks that make further cooperation with Egypt conditional on progress in the reform of democratic institutions, the rule of law and human rights, and to mainstream human rights concerns in all talks with Egyptian authorities."

The EP called for putting "tangible improvements" at the centre of the next EU-Egypt Association Council meeting, saying that cooperation in the areas of migration management or counter-terrorism "should not come at the expense of continued pressure for human rights compliance and accountability for human rights abuses."

It also called for halting exports of surveillance technology and security equipment to Egypt and impelementing full EU export controls because such equipment "that can facilitate attacks on human rights defenders."