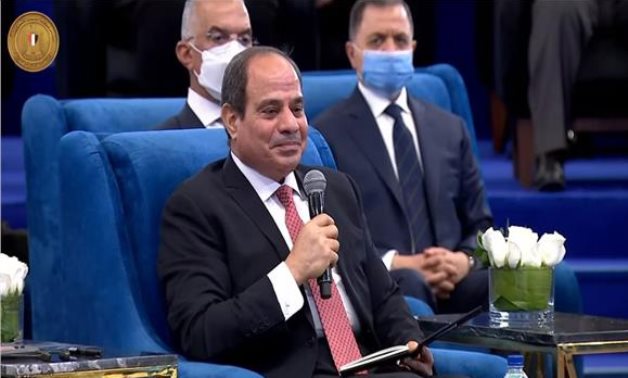 President Abdel Fatah al-Sisi speaking at the ceremony held to celebrate the issuance of the 2021 Human Development Report on Egypt. September 14, 2021. Press Photo

CAIRO – 14 September 2021: President Abdel Fatah al-Sisi expressed appreciation for the UNDP team that prepared the 2021 Human Development Report on Egypt saying that such documentation about the country has been absent over the past decade.

The president noted that such documentation is credible and transparent because of two reasons. One is that the report is prepared by experts. And, the other is that it is issued by international officials.

The president wondered if the report mentioned Egypt's war on terror and the simmering conditions of the region. He pointed out that Egypt's approach to such war has been development along with security measures.

"It is even noticeable that our efforts in development are quite rigorous…They are also very deep and very comprehensive," the president asserted.

"The success of a decision depends to a great extent on its embracement and acceptance among the people," the Egyptian president added.

"Yes, we created a good social safety network to alleviate the impact of economic reform but it is still composing a pressure for all income levels," President Sisi elaborated saying, "I congratulate Egyptians on enduring such reform."

The president also underlined that Egypt has been offering the same public services to refugees, whose number is six million, and who live normally among 100 million Egyptians, given Egypt's policy against refugee camps.

As the report should be issued every two years, the president expressed hope that Egypt would be doing better when it comes to the eradication of poverty among other indicators. That is because of implementing Decent Life Initiative worth LE600-700 billion, which began in rural areas mid-2021, and is lasting for three years down from 10.

The president pointed out to canals lining, introduction of wastewater networks, and establishment of agricultural and industrial wastewater plants that have already begun. "We have spent around LE700 billion on such plants," President Sisi clarified.

The president also underlined the work done at Lake Manzala – spanning over 250,000 square meters - by cleaning it, and removing encroachments on it. That applies to Lake Temsah and Lake King Mariout either. The president even suggested organizing trips for university students to Lake Manzala to witness the revamp.

A ceremony was held Tuesday at the New Administrative Capital to celebrate the issuance of the UN Human Development Report delineating the performance of Egypt on that front over the period from 2011 and 2021.

President Sisi was handed the report, titled "Development: A Right for All, Egypt’s Pathways and Prospects," by both Minister of Planning and Economic Development Hala al-Said, and UNDP Resident Representative Randa Abou El Hosn.