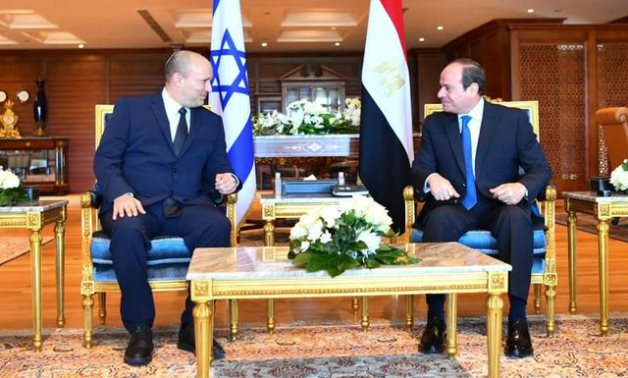 CAIRO – 13 September 2021: Egypt’s President Abdel Fattah El-Sisi reiterated on Monday Egypt’s support to all efforts to achieve comprehensive peace in the Middle East based on the two-state solution and international legitimacy resolutions.

This comes as he met with Israeli Prime Minister Naftali Bennett in the Egyptian city of Sharm El-Sheikh, where they held bilateral discussions, a statement by the Egyptian Presidency read.

Sisi affirmed Egypt’s support to such efforts in the Middle East in a way that contributes to enhancing security and prosperity for all countries of the region, the statement read.

During the meeting, the Egyptian president also underlined the need for the international community to support Egypt’s efforts regarding reconstruction in the Palestinian lands.

Sisi also affirmed the necessity to maintain calm between the Israeli and Palestinian sides, especially in light of Egypt’s continuous efforts to ease tensions between the two sides in the West Bank and the Gaza Strip, the statement read.

The bilateral consultations addressed developments of bilateral relations between Egypt and Israeli in all fields.

They also discussed developments of the situation on the regional and international levels, especially regarding the Palestinian cause.

Last August, Egypt's GIS head Abbas Kamel met with Bennett and his national security advisor. The meeting came as part of Kamel’s visit to the Palestinian and Israeli lands as per the directives of Egypt’s President Abdel Fattah El-Sisi.

The meeting discussed the Egyptian efforts to advance the peace process and the procedures to maintain de-escalation in all the Palestinian lands, an official statement read. Sisi and Herzong discussed efforts to revive the Israeli-Palestinian peace negotiations, a statement by the Egyptian Presidency read.

During the phone call, Sisi congratulated Herzog for assuming his new post and greeted him on the occasion of the Jewish New Year, the presidential statement read.

Sisi and Herzog discussed bilateration relations and issues of mutual concern in light of the dangers surrounding the region, the statement read.

The phone call comes few days after Sisi hosted in Cairo an Egyptian-Jordanian-Palestinian summit that the need for concerted efforts along with partners to revive the Israeli-Palestinian peace talks. Sisi during the summit highlighted the importance of resuming the negotiations in accordance with the international legitimacy resolutions, Presidential spokesman Bassam Radi said.

This comes given the grave consequences of not resolving the Palestinian cause on the security and stability of the entire region, Radi added.