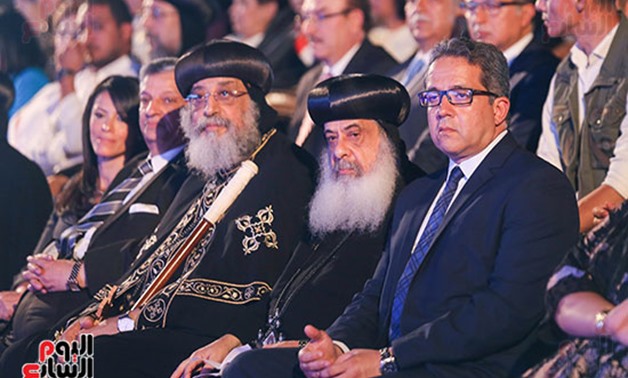 The national anthem was played and documentaries featuring the Holy Family Journey in Egypt were displayed.

The event was attended by the ministers of antiquities, tourism, and culture and a raft of officials, statesmen as well as ambassadors.

In his speech, Pope Tawadros II said the Holy Family settled at the location where the Virgin Mary Monastery and church were later built by the Nile, before they continued their journey in Upper Egypt passing by Assiut and Minya.

Pope Tawadros II stressed that Egypt is beautiful for its people and monuments, praising the concert and the documentary film presented by the church.

"This is a purely Egyptian celebration, which shows the richness of the country’s history, nature and culture," he said, expressing his happiness at raising awareness among Egyptians about the journey of the Holy Family.

Minister of Tourism, Rania al-Mashaat, delivered a speech on behalf of PM Moustafa Madbouli who currently participate in the the 33rd ordinary session of African Union summit in Mauritania. Al-Mashaat pointed out that this celebration confirms that Egypt is the land of peace and it will always open its arms to all visitors just as it hosted the Holy Family in the past.

Al-Mashaat thanked all the associations and civil society organizations that support such celebrations which affirm the unity of the Egyptian people.

The Tourism Ministry has devised a program to encourage tourists to visit the country to see a unique artistic rendition of the religious story and to trace the journey’s trail that covers many Egyptian cities that Virgin Mary, Jesus and Joseph had visited while fleeing King Herod’s persecution in Palestine.

On October 4, Pope Francis of Rome organized a special event for a high-level Egyptian delegation led by Tourism Minister Yahya Rashid to promote a

in the footsteps of the Holy Family Journey in Egypt.

The Holy Family came from Palestine to Egypt via the Arish road and arrived in Old Egypt, and then they moved to Upper Egypt. They hid there for a while and then returned to the north, passing through the Natroun Valley, and then continued their way back through Sinai to Palestine.

Egypt has received two groups of pilgrims from Italy during June who came to visit the path of the Holy Family Journey in Egypt, according to Egyptian Ambassador to Rome, Hisham Badr.

The tours took place under the auspices of the Egyptian Embassy in Rome, in cooperation with the Ministry of Tourism. The delegations visited three monasteries in Wadi El Natrun and some of the oldest Coptic Churches such as the Hanging Church, Abu Serga Church and Vigin Mary Church in Maadi; the trip also included visiting the Giza pyramids and the Egyptian Museum.

Earlier in June, Minister of Culture Inas Abdel Dayem inaugurated the permanent Egyptian exhibition in the Pope’s palace in Viterbo, the first residence for the Catholic Church’s popes 200 years before being moved to the Vatican headquarter. This exhibition was set to include ancient Egyptian and Coptic artifacts.