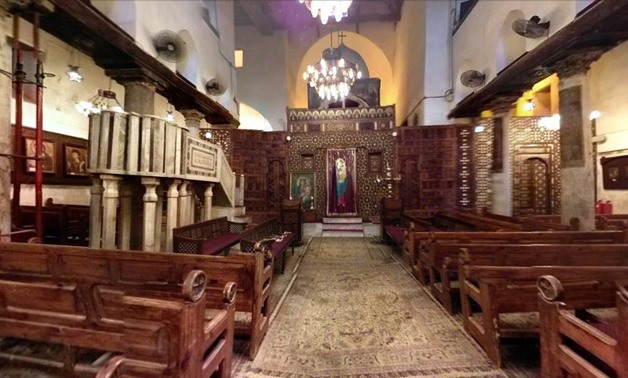 By: Sara Allam
CAIRO – 9 November 2017: It was only normal that the Holy Family visits the area now known as Old Cairo. The area near the Babylon Fortress was teeming with Jews. It also hosted the Jewish complex which was built in the 2nd century B.C. Virgin Mary dismounted her donkey and took her child inside a cave that had been prepared in advance to receive the strangers.

Safely hidden from the eyes of King Herod’s soldiers, the family lived in a cave in Old Cairo for three months before they were forced to change their plans and leave the cave to Maadi.

Our taxi stopped at a metal gate near the ancient Religion Complex area. We left our bags at the security screening device and walked amid many ancient churches and monasteries while the sound of the Adhan (the Muslim call for prayer) started out from the nearby Mosque of Amr ibn al-As. Visitors went in and out from all directions; European, Indian and Asian tourists in addition to street vendors and teachers taking their students on a trip to the site.

We asked about the Church of Abu Serga, and a policeman directed us to stone stairs which opened to a narrow tunnel that took us to a small alleyway where street vendors displayed their postcards and souvenirs. On the right was the church from which the smell of incense emanated and filled the passages leading to the church with beautiful scents. Originally called The Church of Saints Sergius and Bacchus, the church later became known as the Church of Abu Serga after the Arab conquest of Egypt because of the influence of the nicknames Arabs used.
We stepped into the world of Abu Serga. Later on, we would take our shoes off when we approached the spot that was forever blessed after Christ stepped on it. On the right as we stepped in we saw the Life and Passion of the Christ nativity icon which dates back to the 18th century, according to the account of Nancy, an archaeologist who serves the church.

The icon shows in detail Mary giving birth to her fatherless child in a manger. The gifts of the Magi surrounding her, and an angel above her announcing the birth of the King of Kings. We left the icon and walked deeper inside the church. On the floor there was a glass panel that showed a baptism tub beneath which was used by Copts during the reign of Al-Hakim bi-Amr Allah. During his reign Copts were denied the commemoration of the baptism of Jesus in the Nile. They had to dig a tub and fill it with water and bath in it to escape his wrath and at the same time keep the ritual.

On the left of the entrance was a stone baptismal font which was found buried between layers of stone, yet restorative efforts could bring it back to life. A baptism font is a stone sink from which Copts give the secret of baptism to their children and they become servants of Jesus Christ.

In front of a monumental pillar there were relics of saints. Copts keep the remains of the martyrs of faith, and there in the Church of Abu Serga lay the remains of Saint Bashnouna, one of the monks of the Monastery of Saint Macarius the Great. He died in the 12th century and was placed next to the remains of saints Sergius and Bacchus after whom the church was named.

In the center of the church there was a stone pillar about which Nancy provided an interesting account. She said that in 1967, a few weeks before Egypt’s defeat in the war with Israel, the pillar bled, and was then prayed at by Pope Cyril VI who said that the country’s pain is the Church’s pain, and that the pillar bled just like the soldiers on the front.

We walked deeper into the church and came to a narrow passage which took us to stairs. We went down a few steps and found ourselves inside the church’s cave, the sacred spot which was blessed by Jesus Christ and was inhabited by the Holy Family for months. Inside the cave we saw the rock which is said to have been stepped on, and thus blessed, by Jesus. The cave was dimly lit, and taking photos or using the camera flash was prohibited.
Visitors from India were seeking the blessings of Jesus, and different names of Mary were heard in different languages. One visitor called her “Mother of Light,” another said “Virgin Mary,” and a third called her by the name “Madonna;” so many names for the one Mary who is a destination many in the East and West travel to.

The well from which the Holy Family drank is well kept by the church. The well’s water had become stagnant and was, thus, covered by green algae, but the priests had to leave it untouched because the water lifting machines which are used for the renewal of wells could have endangered the ancient architectural structure of the church. Nevertheless, the well endured as a witness to the historical journey even if people no longer drink from its water.

In his office which is annexed to the church, Archpriest Angelos Girgis receives visitors and archeologists. In fact, he also wrote a book about the history of the church in which he has been serving for years. He told us that the place where his church is located is the only place the Holy Family came across twice, that is, on their flight in and out of Egypt. It became a church in the Apostolic Age, as Saint Mark the Evangelist and Saint Peter blessed it with their visits.

Empress Helena then decided to build a church above the church of the cave. Archpriest Angelos emphasized that the church and the Ministry of Antiquities are working hard to chronicle the path of the Holy Family, which the Vatican has recently approved. He indicated that he is in touch with different stakeholders, most importantly, the Ministry of Tourism and that different stakeholders are coordinating together to demonstrate the historical significance of this church.