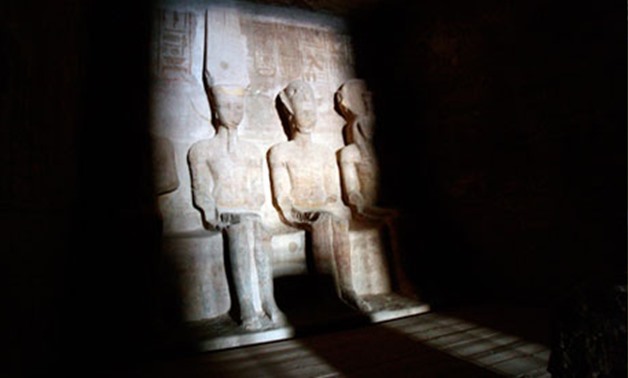 Dawn light shines on the statues of Pharaoh Ramses II (R) and Amun, the god of light (L), in the inner sanctum of the Abu Simbel temple in Aswan, Egypt, Feb. 22, 2014. Reuters/Mohamed Abdel Ghany

By: Egypt Today staff
CAIRO – 22 October 2017: Around 3,500 tourists witnessed the solar alignment over the Holy of the Holies at Abu Simbel Temple in Aswan early Sunday morning, as sun rays showered the statues of gods Re-Horakhty, Amun, and Ptah as well as the Divine King Ramses II himself.

Some 2,000 tourists were Egyptians while the rest were foreigners. The phenomenon, which takes place twice a year on February 22 and October 22, was also attended by the Minister of Antiquities Khaled El Anany, the Minister of Culture Helmy al-Namnam, and delegates from the Swiss and Italian embassies. February 22 marks the coronation of King Ramses II, and October 22 marks his birthday.

Aswan’s Governor Magdy Hegazy also announced that preparations are underway for an international ceremony to celebrate the 200th anniversary of the discovery of Abu Simbel Temple. Hegazy added that screens have been installed in front of the temple to display the phenomenon for all tourists avoiding the packed temple.

All artistic events scheduled to be held on the sidelines of Abu Simbel’s Sun Festival were canceled after a terrorist attack targeted dozens of police personnel in Giza on Friday; announced the General Director of Abu Simbel Antiquities Department, Hossam Abboud, in a statement Saturday.

This year’s phenomenon of solar alignment marks Egypt's 200th anniversary of the discovery of the Abu Simbel temples by the Swiss oriental traveler Johann Ludwig Burckhardt on March 22, 1813.

Festival activities will be limited to watching the phenomenon of the solar alignment and opening the temple to foreign and Egyptian visitors, Abboud said in a statement to Egypt Today.

Celebrations were supposed to take place on Saturday and Sunday and were to include a number of folklore dancing shows in Abu Simbel’s square.

On Friday, dozens of police officers were killed and others injured while on the hunt for terrorists in Giza’s Al-Bahariya Oasis, security sources said. The sources added that the security forces headed to the oasis after receiving information that some terrorist elements were taking shelter there. Security forces clashed and exchanged fire with the terrorists; causing casualties on both sides. 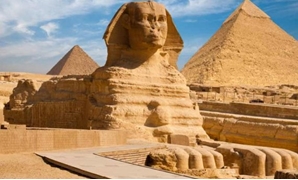